This is the second of two posts I am writing on the three day Nile cruise that we took from Aswan to Luxor aboard the Radamis II as part of an Egyptian tour by Canadian travel company Adventures Abroad. I ended the first post sitting in the ship’s lounge having drinks with Alison watching a belly dancer and listening to traditional Egyptian music. After a good night’s sleep, followed by a decent buffet breakfast we were fortified for the assault on the Temple of Edfu which lies about a mile away from the Nile in the small city of Edfu. I use the word assault deliberately because I knew from what I had seen yesterday at Kom Ombo that we would be only one of dozens of groups heading to the temple at the same time. It was going to be chaotic, but Edfu is such an important site that we were not going to pass it up.

The traditional way of getting from the river to the temple is by way of caleche which is a two-wheeled one horse carriage with a top that can be rolled back like a convertible. If you’ve been to old Quebec or Central Park in New York City then you’ll know what a caleche looks like. Our caleche drivers were not quite up to North American standards, foregoing top hats for turbans, but in all other regards these were the typical carriages that are usually associated with a leisurely and romantic ride along the Seine or through the French Quarter of New Orleans. Except that there was nothing leisurely or romantic about this scene, as the caleche drivers argued with each other and vied for customers, creating a cacophony that seems to be an Egyptian tradition put on just for the benefit of the tourists. They really needn’t bother, we could live without it.

Seriously though, if you didn’t have someone in charge who had things under control, this could be a very daunting experience. Fortunately, we had our excellent Egyptian guide Ahmed Mohsin Hashem and the Adventures Abroad team leader, Martin Charlton, who between them managed to secure caleches for the entire group and get us on our way through the narrow streets of Edfu to the temple. As we arrived at the debarking area in front of the temple, Ahmed made us all memorize the number of our caleche and when we were finished, to seek it out for the return journey. He said we didn’t have to worry about the caleche being here because the driver didn’t get paid until he made the round trip.

The Temple of Horus at Edfu

The Temple of Horus at Edfu is the best preserved Egyptian temple in existence. The reason for this is that like the Philae Temple in Aswan, it dates from the final period of Egyptian dynastic rule, the Ptolemaic. Constructed between 237 and 57 B.C. it is a relative baby in terms of Egyptian temples and thus is a couple thousand years younger than some of the other famous temples. That’s two less millennia of natural disasters, warfare and erosion to put up with and explains why it looks so very fresh at a mere 2,074 years of age.

The temple is dedicated to my favourite Egyptian god, Horus, who is one cool looking dude with a buff body and the head of a falcon, often topped with the double crown of Upper and Lower Egypt. This is the imposing entrance to the Temple of Horus and you can see his image on both sides of the pylons.

I had to crop this photo to cut out the hundreds of tourists who were between me and the temple entrance. Here is what is looks like without the people. For a very modest price we were able to buy a CD produced by a friend of Ahmed’s, with thousands of pictures of every aspect of every major temple or site in Egypt, including the interiors where tourists are often not allowed to take pictures.

Notice the two statues of Horus as a falcon that stand beside the entrance.

Here is a plan of the temple. Like most in Egypt there is a large entrance which leads to an inner court which in turn leads to the hypostyle (essentially a large room made up of many columns) and finally the sanctuary.

What follows are some of the photos I took inside the temple. It is truly an amazing place.

This is Alison inside the inner court.

Note the statue of Horus beside the pronaos (entrance to the hypostyle hall), considered to be the finest example of Horus in falcon form in existence. It took some patience, but I did get this photo, sans any of the Chinese tourists who mobbed it for a good twenty minutes before moving on. 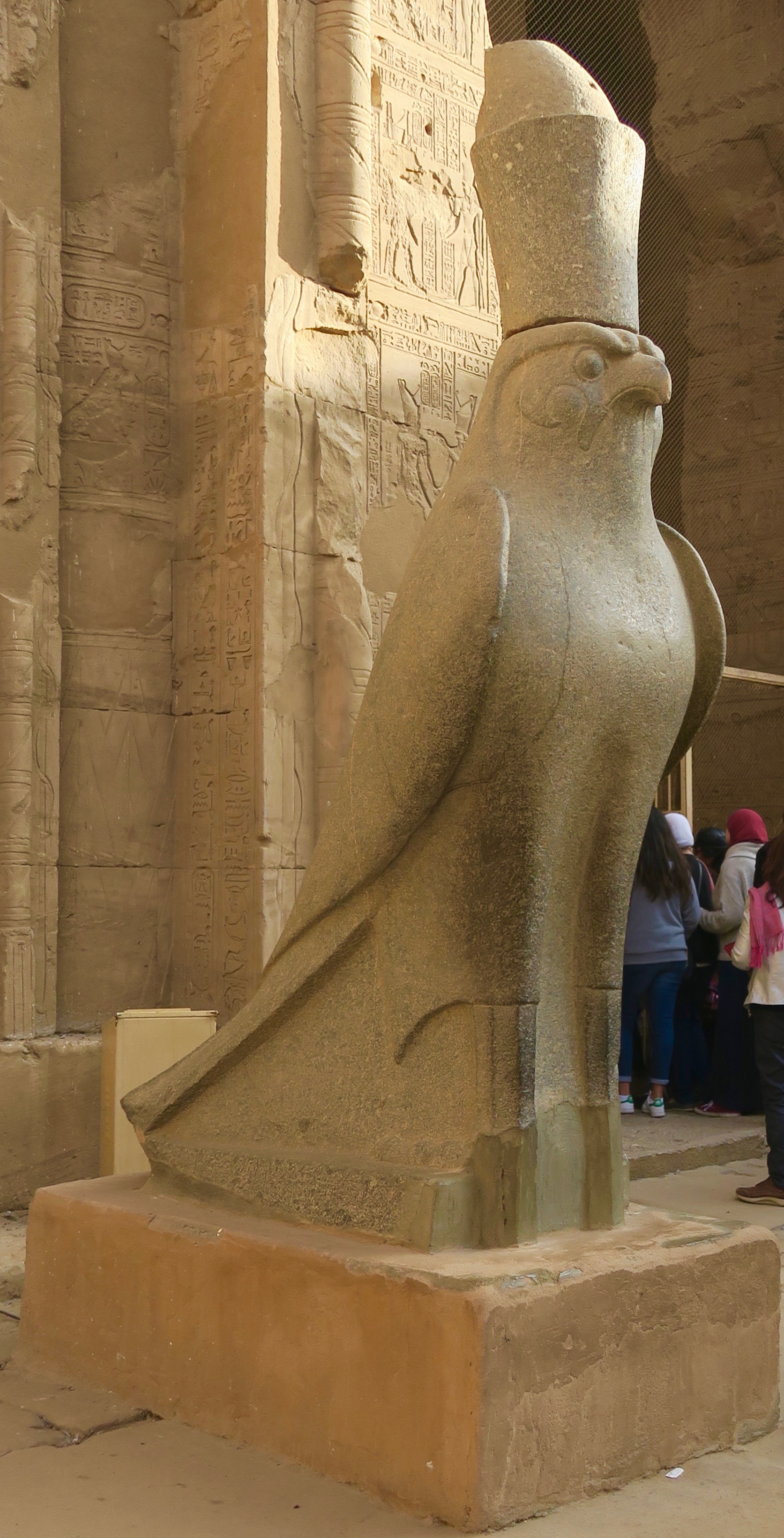 The pillars in the hypostyle are almost completely covered in hieroglyphs and you can still see traces of the paint that would have made these columns spectacular when they were new.

More traces of paint on the ceiling of  of the entrance.

The reliefs and hieroglyphs at Edfu are outstanding. This one shows offerings being made to Horus in his semi-human form.

This is Horus, his mother Isis and his wife Hathor. I doubt that any self-respecting Egyptian god would say to him, “You’re wife’s a cow.”

This is my favourite hieroglyph, the bee (even though it looks more like a moth to me), which apparently was meant to symbolize the king or pharaoh, but don’t quote me on that.

We were at the temple for well over an hour and it was time to return and find our caleche. This is the scene that greeted us. Multiply this X one hundred and you might get an idea of what it was like trying to find our caleche. No matter where we looked we couldn’t find him and that’s because he didn’t show up – must have received a better offer. Everyone else’s driver was there so they headed back to the boat.

Ahmed said not to worry and in no time he had corralled a caleche and we were on our way. Whether it was someone else’s or not, I was afraid to ask. For all I know there might be some befuddled Chinese tourists still looking for their caleche in Edfu.

Here we are making our getaway, with Ahmed on the left and Alison and Colleen quite happy to be on their way.

Back on board the Radamis II set sail under glorious blue skies for the city of Luxor. Again, we were part of a convoy of ships going to the same place at the same time, but we seemed to be near the front of the line and I just took a seat on the upper deck and watched the Nile roll on.

Sugar cane is a big product in Egypt and barges laden to the point of absurdity were an increasingly common sight.

I was in a half reverie when suddenly I saw something flying through the air to land with a splash in the swimming pool. It was some type of cloth article wrapped in plastic. What the hell!

I jumped up to see a small flotilla of rowboats heading our way with the leaders shouting and gesticulating. The thought of Somali pirates briefly flashed through my mind, then I remembered we were on the Nile and not the Gulf of Aden.

Looking over the side I saw the source of the increasing barrage of textiles. Some of the passengers were throwing the packages back, usually missing the boat and causing the boatmen to make a mad scramble to retrieve their rejected goods. Ahmed got everyone to calm down and upon inspection,  the things being offered for sale were not bad. After all, Egyptian cotton is universally praised for its quality.

Alison decided she would like to buy a tablecloth and napkin set and had Ahmed do the negotiating. Once the price was agreed the money was placed in the plastic bag and tossed down to the boatmen who bowed in appreciation. Here she is with the tablecloth which really was a good buy.

The reason we were being assailed by river hawkers is that we were approaching the one set of locks between Aswan and Luxor. The ships had to dutifully line up and go through one by one making them sitting ducks for the river salesmen.

Ahmed told me that before the Egyptian tourism bust, this process could take the better part of a day. Luckily we were close to first in line and it didn’t take long. We passed through a battalion of riparian entrepreneurs who apparently didn’t have access to a boat, all pleading for a sale in increasingly frantic tones as we neared the end of the passage.

The hawkers were not the only ones interested in seeing the boats go by. These little kids couldn’t stop waving and laughing as we did the same, taking their pictures as well. It was a very nice Egyptian moment.

Not long after passing through the lock we arrived at the city of Luxor where we would spend the next three days exploring the many wonders of the area. I hope you’ll join me.