Last October, during a respite in the Covid pandemic, Alison and I travelled to Turkey with Adventures Abroad. We had been to this wonderful country a number of times before and leapt at the chance to visit it again, particularly as the itinerary included a number of places we had not been to before, notably Cappadocia. In this post I am going to try to answer three questions that might be on the mind of even the most intrepid traveler – why Turkey, why now and why go with Adventures Abroad? If I’ve done my job properly, by the end of this post the reader will be looking up the dates for the next AA trip to Turkey.

I cannot deny that Turkey has not been getting the greatest press coverage over the past few years and if you look at it strictly with an eye on the Turkish President then rightly so. But keep in mind that a certain Former Guy was in charge of the USA and fomented an attempted coup. That has not stopped people from coming to visit NYC, the Grand Canyon or Disney World, nor should it. It’s all about context and in that regard, Turkey is one of the safest and most interesting places you can possibly visit in these hectic times. Here are the reasons why Turkey should be at or near the top of your bucket list destinations. I will return to talk about your concerns about Erdogan later in this post.

2. If you are a lover of history and in particular, ancient history, then Turkey must be on your radar. While it is not currently on the Adventures Abroad itinerary, Göbekli Tepe, at up to 12,000 years old is considered to be the oldest known man made structure in the world. What is on the itinerary are artifacts from the Hittites, Assyrians, Babylonians, Persians and many other long gone cultures that you may have first encountered in the Bible. Even more interesting to me is the fact that Turkey encompasses the legendary lands of Lycia, Ionia, Lydia and Phrygia all of which are traversed on the Adventures Abroad tour.

Some of the best Greek and Roman archaeological sites are found in Turkey including Ephesus, Pergamon, Aspendos, Side, Didyma and Perge all of which are on the itinerary.

Oh, and how about two of the Seven Ancient Wonders of the World? Although there’s not much left of the Temple of Artemis at Ephesus or the Mausoleum of Halicarnassus at Bodrum, just standing on the site of these places can create a sense of awe.

3. Maybe you’re more into mythology than actual history. In that case, Turkey is the place for you. While the ruins of Troy may not live up to your expectations, just trodding the same ground as Achilles, Hector, Agamemnon, Priam and Ajax will definitely make you want to read the Iliad one more time. Looking out from the walls of Troy to the Dardanelles you can envisage Ulysses and Aeneas both leaving the burning city on their epic voyages that we now know of as The Odyssey and The Aeneid.

While looking up at Mount Olympos on the visit to Aspendos you can imagine the winged horse Pegasus and its rider Bellerophon on the way to slay the chimera that terrorized the native Lycians. Or while visiting the Museum of Anatolian Civilization in Ankara you can look upon the skull of King Midas and see that it’s not made of gold.

4. Not into history, real or imagined, then how about philosophy, mathematics and medicine? Western philosophy and the scientific method were virtually invented in the Greek settlements along the Ionian coast and only later exported to Athens. Thales of Miletus was the first person known to have used an inquiring mind to explain the world around him rather than just accepting that man’s fate was determined by the gods. At the Asclepeion of Pergamon you can follow in the footsteps of the physician and philosopher Galen whose medical theories dominated the field for over 1,300 years.

5. Maybe your bent is religious studies in which case Turkey will more than satisfy your quest for knowledge as you visit not just Hagia Sophia and the Blue Mosque, but many more religious sites including the church where the real St. Nicholas preached and the mosque where the dervishes first whirled.

6. For many people it is the natural history of an area that is more appealing than human history and, (I’m starting to sound like a broken record) Turkey delivers here as well. It is a large country, one and a half times as large as France and like France it has an incredible variety of landscapes and seascapes. The first time I went to Turkey, just coming from Greece, I was surprised at how much forest there was, both coniferous and deciduous. I was not surprised at the stunning beauty of the Ionian and Mediterranean coastline which is justly world famous. One of the highlights of the itinerary is a day spent on the water in a traditional Turkish gulet.

And then there is Cappadocia which is a landscape that almost defies belief. Having the opportunity to view it from above in a hot air balloon will, without exaggeration, create memories that will last a lifetime.

7. The food – I guarantee that you will not be disappointed by the cuisine in Turkey, whether you are someone like me who loves meat, vegetables, seafood, pasta, desserts etc. or are vegetarian or vegan.

Some of the things I just could not get enough of were the many types of bread, the yogurt, especially topped with Turkish honey, various cheeses and the seemingly endless ways in which the Turks prepare lamb. And something I never thought I would be writing – the lentil soup, which is ubiquitous in Turkey, is actually really tasty. Finally, yes Turkish delight is delightful and not like anything you could possibly get back home.

In the upcoming posts I will highlight some of the most memorable meals and dishes that Alison and I enjoyed on this recent trip.

The one thing I have not included as a reason to visit Turkey, but which is much ballyhooed in some quarters, is going to a bazaar, particularly the Grand Bazaar in Istanbul. To be honest, I can’t stand the place. It is way too crowded, too smoky and too touristy. The constant haranguing by vendors if you even so much as cast a sidelong glance at some of the mostly junk they are hawking is more than tedious. Now if you can find a legitimate market in a smaller town or city where the locals really do shop that is a different story. These are colourful and photogenic to the extreme.

One place I do recommend shopping at is a genuine Turkish carpet emporium. When I say genuine, I mean one that has been licensed by the Turkish government and produces hand made carpets without employing unfair labour practices. On every trip to Turkey we buy at least one carpet. They aren’t cheap and you really do have to bargain hard (which I leave to Alison), but they become instant family heirlooms that will last hundreds of years. Although Adventures Abroad has a policy of not taking its customers to places to buy souvenirs and such, the guides will make sure you get to a non-ripoff place if you ask. I’ll elaborate further on this when we get to the place where we bought this trip’s carpet.

So that’s a very short and nowhere near comprehensive list of reasons to visit Turkey. Now I’ll try to answer some of the questions you might have that are causing hesitation about going. 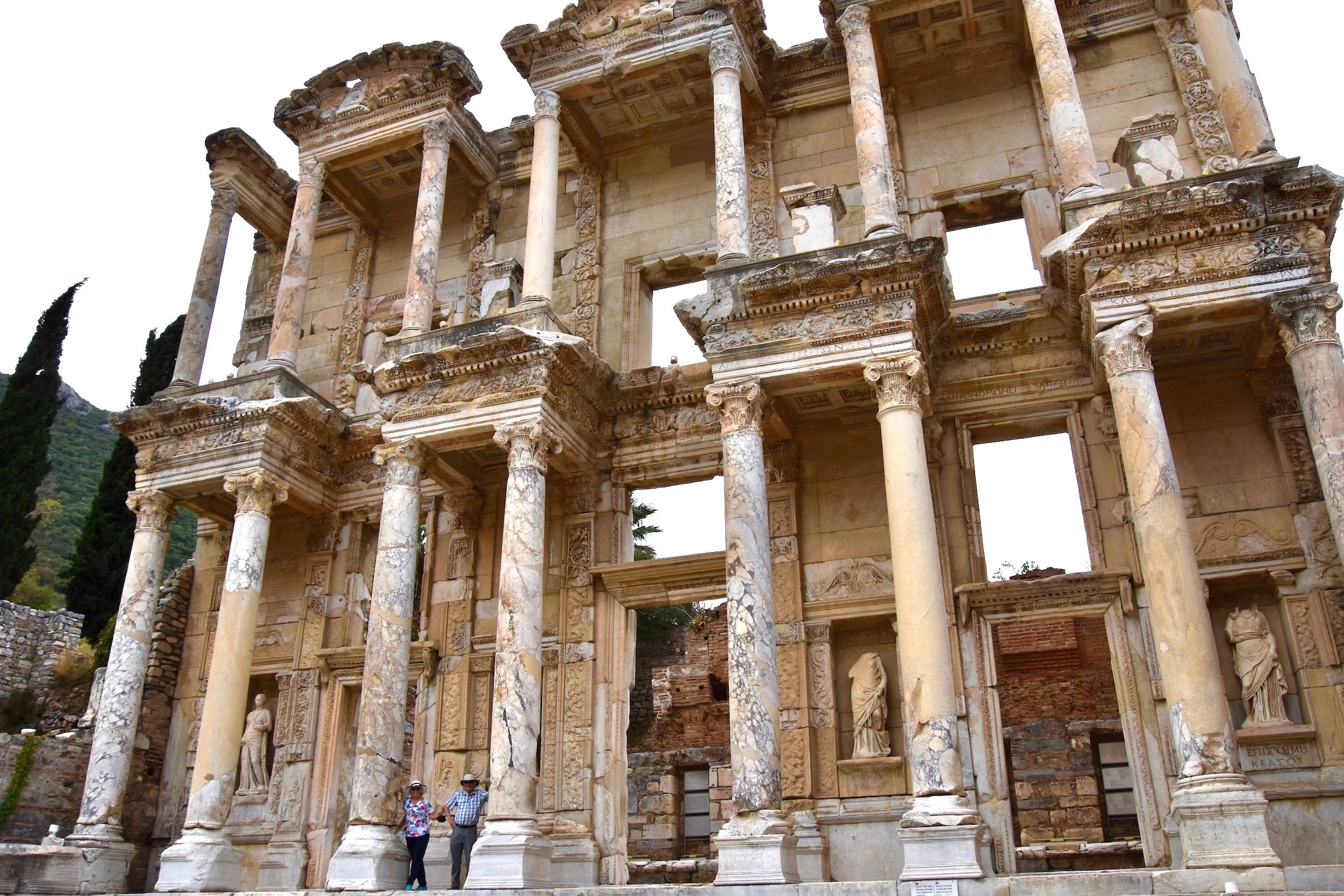 At the Library of Celsus

Ok, I think I’ve covered why you need to visit Turkey and why 2022 might be a good time to do it. The next question is why go with Adventures Abroad as opposed to the many other companies that offer a Turkey itinerary. That one is easy to answer in only two words – Yasemin Reis.

Yasemin has been leading AA tours to Turkey for over two decades and her knowledge of the many, many historic and archaeological sites that you will visit on this tour is encyclopedic. Our tour was the first she had been tapped to lead since Covid and she was overly apologetic about her English which she thought was a bit rusty. Not so. The quality of the tour leaders that Adventures Abroad uses is outstanding and Yasemin definitely lives up to that high standard.

Another reason I recommend AA is their selection of hotels which are almost uniformly excellent. I will go into much more detail about the best ones in posts to follow, but here’s an example. This was the view from our room at the Manastir Hotel in Bodrum.

Well those are my reasons for visiting Turkey with Adventures Abroad sooner rather than later. In the next post I’ll write about the protocols on arriving, getting into Istanbul and the really great hotel in the Sultanahmet that we stayed at both before, during and after the tour.