When I’m travelling I always try to get up at first light to see if there is going to a ‘magic hour’. This is the brief period of time in the very early morning and late dusk that creates the best light conditions for photographs. It took three days, but on the third morning in Winnipeg I saw that we were going to have a magic hour, so Alison and I hopped in the car and drove through the deserted streets down to The Forks where we parked and set out to get some nice shots. The previous day was Treaty Day which is celebrated by the aboriginals at The Forks where Treaty No. 1 was signed and the mutual promises made reinforced by the annual Treaty Day payments. It is a day of celebration and I saw that there had even been a troop of Mi’kmaw dancers from Eskasoni in Cape Breton on the bill. However, this morning we had The Forks to ourselves and I was able to get the shots of the Canadian Museum of Human Rights that are posted here.

After circling the CMHR to get shots from all angles we moved on to the Esplanade Riel, the beautiful pedestrian bridge that links downtown Winnipeg to the traditional French area of the city, St. Boniface.

Moving on along the river we approached the ruins of St. Boniface Cathedral which was destroyed in a spectacular fire in 1968. The church was not rebuilt in the traditional sense, but the skeleton has been preserved and is perhaps even more impressive as a ruin than it was as a functioning church. I say this because you won’t find anything like this anywhere else in Canada. Abandoned or destroyed cathedrals and abbeys abound in Europe (Henry VIII specialized in creating them), but St. Boniface is unique in Canada. That said, utilizing some of the original structure, a modern church has been built inside the walls and continues as a parish today.

What was once the church’s greatest feature, the huge stained glass window, now looks like a Cyclopean eye gazing sightless at the banks of the Red River.

These triple arches were once the main entry way and supported huge wooden doors.

But the cathedral’s bells have been replaced and on occasion still lament the demise of this great symbol of the Catholic faith and the role it played in the early development of Manitoba.

In front of the cathedral is one of my favourite places to visit in Winnipeg – the historic graveyard. Here in a very small area one can piece together the history of the Metis people which is critical to understanding Manitoba today. In a nutshell French explorers, notably the La Verendrye brothers, were the first Europeans to penetrate the great boreal forest, come out onto the prairies and start trade with the aboriginal peoples already living here. Here is a monument on the church grounds of one of the La Verendryes (Pierre I think) and an early priest.

Once the routes to the west were known hundreds of French fur traders quickly followed and freely intermarried with aboriginal women. Within a hundred years a distinct group of individuals emerged who were neither aboriginal nor European, but Metis as they came to be called and they largely occupied the land where the city of Winnipeg sits today. Following the explorers and fur traders were the priests, most notable Bishop Provencher who was sent to the area in the early 1800’s and promptly established St. Boniface as the religious centre of what was now the Red River Colony. You can see his rather grandiose grave in this cemetery.

Fast forward to confederation and the admission of Manitoba as the fifth province in 1870. By now the Metis had in effect been eclipsed population wise by the onrush of European settlers to the area, but they were guaranteed certain rights under the terms of Confederation. The great defender of these rights was Louis Riel who led two unsuccessful attempts to preserve Metis lands from encroachment by Anglo-European settlers. He was hanged in 1885 in Regina. Read my post on the final battle that did Riel in – Batoche and learn much more about this much maligned man.

I can’t think of any figure in Canadian history who has undergone a more transformative change in the way he is viewed today as compared to only fifty years ago. Originally vilified as a traitor, Riel is now considered a founder of Manitoba and but for his efforts the Metis people would not be where they are today as important players in all aspects of provincial affairs. I can well remember the controversy when the province decided to erect a statue of Riel behind the Legislature in the late 1960’s I think. Many Winnipeggers were not amused and then when the statue was unveiled showing Louis Riel as a tormented soul, many Metis were not amused.

As in life, in death Louis Riel remains a complex and controversial figure to this day. Hopefully his soul is not tormented as he lies buried in this Metis hallowed ground.

One last grave in this cemetery is that of Chief One Arrow whose last words were ” Do not mistreat my people”. Good luck with that.

The St. Boniface cemetery has many other interesting tombstones, including many of the Grey Nuns who lived in the nunnery that is now a museum. The one monument I can never figure out is this one.

This is the monument to the poilus which was the name of the ordinary French soldier in World War I; just as the Brits had their tommies and the Americans their doughboys. However, I have never known if French Canadians who served in WWI were called poilus as well.

Crossing back over to the Winnipeg side we rambled on along the river and came across this iron monstrosity which reminded me of one of those Transformer toys, but in reality is the remains of a railway bridge.

The history lesson continued as we stumbled across this monument to the Red River Settlers kind of hidden away at the end of Bannantyne Avenue. There is no question that there were serious tensions between the Scottish settlers that Lord Selkirk brought to Manitoba in the early 1800’s and the Metis and it seems that those still might exist in the way both groups are viewed today. Whereas the role of the settlers was once over played and the Metis underplayed, the reverse now seems to be the case. The reality is that both groups were and are integral to the history of Manitoba and the contributions of both should be equally recognized.

The light was still good so we made our way through still deserted streets to the Winnipeg Exchange District where I hoped to get some good shots of the interesting buildings that make up what was once the heart of the city in the early 1900’s. After a long downslide the Exchange District has undergone somewhat of a renaissance and is now a National Historic Site and the one of the most interesting parts of the city. However, our visit started out with a real shocker. This is the Union Bank Building, at the time the highest building in Western Canada. It is certainly one of the best preserved. When we read the plaque identifying the building Alison realized this was the very building from where her grandfather’s only brother fell to his death during construction. He is buried somewhere in Winnipeg, but we don’t know where.

That put a bit of a damper on things, but we continued to explore the Exchange District and there were in fact lots of buildings worth taking pictures of. Here is a small gallery. 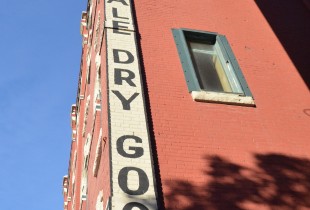 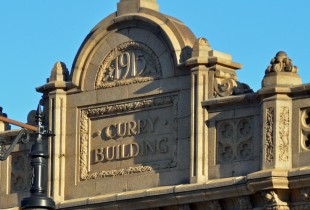 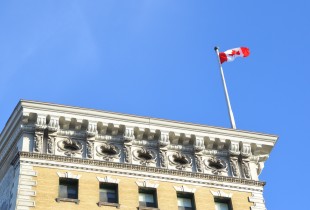 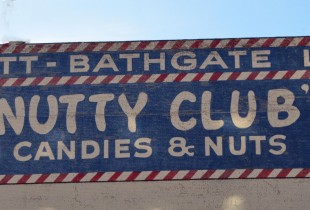 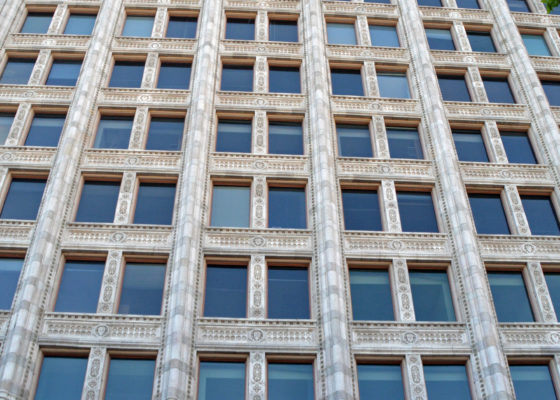 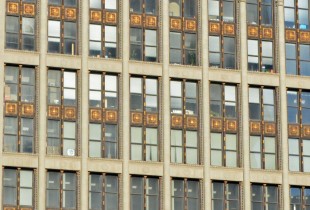 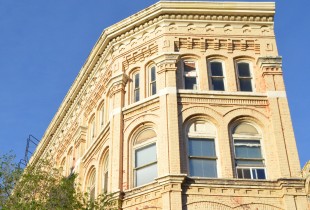 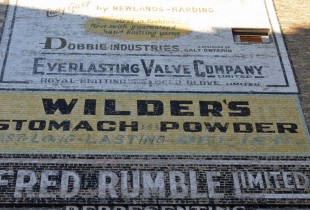 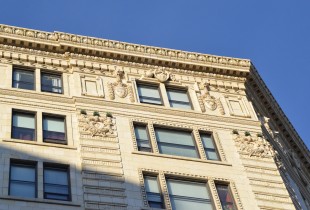 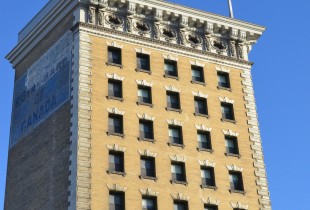 By now we had completed a loop that took us back to the The Forks, but there was one last stop to look at Shaw Park the home of the Winnipeg Goldeyes baseball team. Not too many teams are named for fish – San Jose Sharks and Florida Marlins come to mind, but it’s pretty hard to imagine a tiny goldeye, usually less than a pound, striking fear into any team, but this guy is doing his best.

In just over an hour and a half we had visited many of the most important sites in the history of Winnipeg. Not a bad accomplishment before eight in the morning. We’ve still got time to make a visit to the Winnipeg Mint. Please join us.