If you have any interest in history whatsoever you must visit the Bridgetown Garrison which is part of the designation of Historic Bridgetown and its Garrison as a UNESCO World Heritage Site. Yes most people come to Barbados to relax on the beach, partake of the great cuisine, golf, fish – you name it.  Spending a half day touring historical sites might be the last thing on the typical tourist’s mind, but trust me, having just come from this tour I can vouch that it is more than worth the time. Here’s why.

First the basics. The tour is put on just twice a week, every Tuesday and Thursday morning, by the Barbados Garrison Historical Consortium Inc., a not for profit organization dedicated to preserving and publicizing the Garrison and surrounding area. Most people think that getting a UNESCO World Heritage Site designation automatically means that funds will be available to preserve and promote the site. Not so – it’s usually up to volunteers like James Blades and Peter Stevens, two dedicated Bajans who are proud of their island’s history and want more Barbadians and tourists to appreciate the significance of the Bridgetown Garrison and the important role it played in world history. Without it, Bajans may very well have been speaking French, Dutch, Spanish or Portuguese with a totally different legal and political system; unlikely for the better.

The tour costs $55.00 USD, but that includes admission to the George Washington house which is $20.00 BDS on its own. It also includes pickup and drop off at your hotel. You are also transported by bus from one major attraction to another. In our case, those who were staying on island had a smaller bus with Peter as our guide, while those from the cruise ships travelled behind with James in a larger bus. In other words, there is not a lot of walking and our tour had a woman in a wheel chair who seemed to fare quite well.

The tour includes a visit to George Washington House, the Garrison tunnels, Charles Fort and most importantly entry into the Barbados Defence Facility which is otherwise off limits to tourists. The only way you are going to see the sights inside this complex is on this tour. The tour concludes with the very colourful changing of the sentry ceremony in front of the Main Gate Clock tower.

Tour participants gather at the entrance to George Washington house, which is a stand alone attraction that you can visit on you own, but it is much more interesting with a guide like Peter. If you are waiting for the tour to begin feel free to visit the house and get some good photos before too many people get in the way. I got this one while waiting as well as an interior shot coming up.

Even though I am a Canadian I have always been a great fan of George Washington – he was probably the single most influential person in American history and the fact that he left office voluntarily set the stage for American democracy as we know it today. Compare that say to some other ‘Fathers of their country’ like Robert Mugabe and Fidel Castro and old George looks pretty good. I even have a copy in my living room of the same lithograph that can be found at Mount Vernon.

Last spring I visited areas of western Pennsylvania where Washington saw action with General Braddock and wrote about it in this post. So I guess you could say I was psyched to visit another spot associated with the great man.

Most Americans do not know that Washington only ever left what became the United States once, and that was to visit Barbados with his brother Lawrence for a two month period in 1751. The Bridgetown Garrison tour opens with a 15 minute film about Washington’s visit to Barbados and how it influenced his life and indirectly, American history. Usually these type of preliminary warm up films are something you need to suffer through to get to the real deal – not this one. This is actually a fifteen minute drama, well acted and shot on site in Barbados as well as Virginia. When you enter the house you will see the same sets as in the movie. It has, as they say, ‘Production value’.

After the movie Peter takes us on a tour of the ground floor of the house including Washington’s bedroom. There is much debate about the various places George Washington slept, but not here.

Most of the artifacts in the house date from the time of George’s stay, but in the dining room there is a preposterously long dining table that is actually quite new. It was built to seat the guests for what is rapidly becoming on of the most successful sources of income for the Garrison Consortium, Dinner with George which takes place right here. Amidst a candlelight dinner George recalls his time in Barbados and regales guests with tales of his rise to prominence. As Peter noted, if you don’t pepper him with questions he never shuts up. Sounds like a hoot.

After Washington House the Bridgetown Garrison tour heads to the fabled  tunnels that run underground for thousands of feet between various parts of the garrison. So far 3,000 out of an estimated 10,000 feet of tunnels have been unearthed. Today we get a chance to traverse a 206 foot section that runs perpendicular to the George Washington House. I learn to my surprise that these are not really tunnels at all, but deep trenches that were then enclosed with arched ceilings to create the effect of a tunnel. Tunnel or not they are very narrow and by today’s standards of body mass a lot of people couldn’t get through them, but luckily I still can.

Next on the Bridgetown Garrison tour we get in the little bus and head the short distance to Charles Fort which I am surprised to learn is actually on grounds leased by the Hilton Barbados Resort, but it is open to any member of the public at no charge. Peter explains the history of the fortifications that protect Carlisle Bay. Unlike most forts which are meant to be seen and deter potential attackers just by their menacing appearance, (Halifax Citadel in my home city of Halifax, Nova Scotia for example), Charles Fort has an extremely low profile that is not intended to be seen from the water. I can attest to this personally having been out on Carlisle Bay a few days after this visit. Potential invaders entering Carlisle Bay would find out too late that they had fallen into a trap and were at the mercy of the fort’s guns.

On a less menacing note the view of Carlisle Bay from Charles Fort is amazing.

Looking over the battlements Peter pointed out the remains of old cannons that are apparently common in Barbados’ waters. Salvaging them is not permitted.

The next part of the Bridgetown Garrison tour is the one that ordinary tourists do not get to see. We take the small bus to the guarded entrance to the Barbados Defence Force where we gain entry and pull up in front of a part of the Barbados Garrison that is still in use by the modern Barbados military. Here is the crest of the Barbados Regiment over the entry way to the Garrison Drill Hall.

On the left is the Officer’s Mess and apparently we are permitted in here only while the officer’s are not using it for their meals. It is decorated with ceremonial swords, regimental awards and has a great view of the Garrison Savannah, a huge race track that is the oldest in the Caribbean and still in use today by the Barbados Turf Club.

Opposite the Officer’s Mess there is a large room where a fellow is working on his laptop when somehow the subject of cricket comes up and Peter explains that, contrary to what most people think, more people play cricket than any other sport in the world. This makes sense to me because Indians and Pakistanis play it with a passion – that’s way more people than in Europe and a good chunk of South America. The guy at the laptop pops his head up and says ” No way mon. It’s football!” (that’s soccer to North Americans like me). A lively debate ensues with neither side convincing the other, but it’s an interesting diversion on a topic as old as each sport.

Inside this room are more interesting things to see including this stack of ceremonial drums which seems to have been assembled just for photographers.

Of more import was the original first flag of Barbados which was raised in the Barbados Garrison in place of the union jack on November 30, 1966.

Moving through the drill hall we emerge onto the grounds of St. Anne’s Fort which is substantially larger than Charles Fort and still in use today. There is a small covered bar where we are offered a choice of of rum punch or fruit juice. Sipping my punch I examine the dozens of naval crests that have been attached to the walls over the years by visiting warships from other countries. Here are just the crests from Canadian ships. That’s the H.M.C.S. Halifax crest in the upper right corner, distinguished by its kingfisher.

After some time to explore the interior of St. Ann’s Fort Peter leads us along the outside walls of the fort to a doorway marked Barbados National Armoury which he opens with an old key. Inside there is a great array of cannons, many of apparent great age. While waiting for the larger group to catch up to us I poke around and run into none other than Lord Willoughby at the Mermaid Tavern outside Oistins negotiating terms of settlement with Cromwell’s forces in 1652. You doubt me? Have a look.

Once James arrives he points out the significance of some of the artillery on display including one of only two known pieces of cannon surviving with the Oliver Cromwell crest embossed on it. By way of explanation, all English cannons since at least Henry VIII were embossed with the monarch’s royal crest. Cromwell was no different, but after Charles II regained the thrown he had all traces of the Cromwell markings removed. The one on display here managed to avoid that fate and thus its rarity.

Before leaving the armoury I wandered over and read this print explaining in a perfectly rational and believable way how the expression “Cold enough to freeze the balls off a brass monkey” came to be. Read it and see why.

The last stop on the Bridgetown Garrison tour is one that most people will probably find the most enjoyable – the changing of the sentry (not guard) at the clock tower which takes place exactly at noon. The clock tower is an architecturally interesting building painted in an unusual colour that is the symbol of the Bridgetown Garrison. Guarded by two sentries it is an imposing edifice with the British Coat of Arms embossed on its pediment. 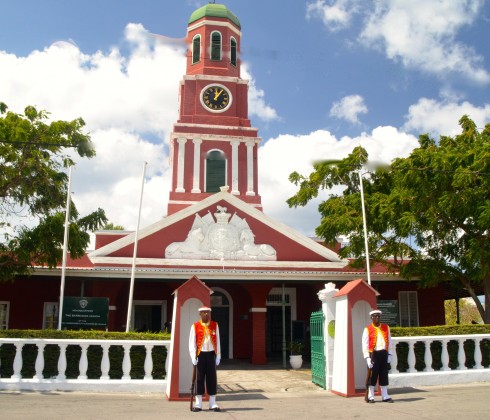 The ceremony lasts about twenty minutes and is performed by retired members of the Barbados Defence Force. It is pure pomp and pageantry that mark among the finer remnants of British rule. Colourful and musical, you don’t want to miss it on a visit to the Bridgetown Garrison.

And tell me you won’t want to get your picture taken with this imposing gentleman?

Thank you Peter and James and all the other members of the Barbados Garrison Historical Consortium Inc. for making this tour possible.

After the tour you might want to make your way back to the starting point for lunch at the restaurant on the grounds. It makes a fabulous pulled beef sandwich.

In the next post we’ll tour the south and east coasts of Barbados with a private guide. Please join us.