Merrion Square - A Must Visit Location in Dublin. Here's Why.

Home › Destinations › Merrion Square – A Must Visit Location in Dublin. Here’s Why.

Merrion Square – A Must Visit Location in Dublin. Here’s Why.

Join me in exploring Merrion Square later in this post, but first a few words on why I’m here in the first place.

This is the second day of a guys golf trip to Ireland. Yesterday we flew overnight from Toronto and after checking in at The Conrad, to avoid any chance of jet lag, we immediately headed to the Temple Bar area of Dublin to quaff a few ales. Our first stop was at one of the oldest and most venerable establishments in Dublin, Oliver St. John Gogarty or just Gogarty’s as most people call it. Here we are with our first or in some cases second pint of the trip. From right to left that’s Don Harding, yours truly, Brian MacLellan, Peter Wedlake and Rob Purdy. Yet to come are Chuck Johnstone, Mitch Hathaway and David Black. This is the only picture you will find from last night. 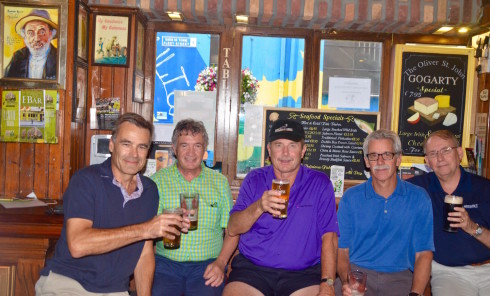 Our anti jet lag  preparations continued to The Temple Bar pub,  The Brazen Head which incredibly, traces its roots back to 1198, and lastly the Eastside Tavern back near the hotel. I had enough sense to forego the final stop at the piano bar in the hotel and that is why I am up early and ready to do some exploring on foot before we head out to golf in the afternoon. So walk with me to Merrion Square.

Merrion Square is not square, but rectangular and denotes more an area than just the interior of the fenced off area that is Merrion Square proper. Everyone who’s been to Dublin has seen the posters of brightly coloured Georgian era doors for which the city is justly famous. Well this is the area most closely associated with Dublin Georgian architecture and I’ll get to the doors, but first a quick tour of the park. Here is a map with the numbers corresponding to statues and busts of famous Irishmen and others to be found within the park.

To me the best place to enter the park is at the northwest corner near #2 where you will come upon, what in my opinion, is one of the greatest examples of a modern sculptural portrait to be found anywhere. Here is Oscar Wilde in all his dandified glory.

While Oscar is widely identified as being a progenitor of the fight for the rights of gays, albeit a persecuted one, he in fact was bisexual and had two children who have living descendants today. I learn this from overhearing a private guide who was leading a couple on a tour of the park. I do know that the gay movement still venerates him nevertheless because I saw what they did at his gravesite in Pere LaChaisse cemetery in Paris this spring – yes those are big red kisses.

The one thing everyone can agree upon about Oscar Wilde, who lived just across the street at 1 Merrion Square, is that he was a great wit, satirist, playwright, poet and novelist; in other words a pretty well rounded guy with words. While most of what he wrote was fairly ‘light’ he could write stuff that was bone-chilling, The Picture of Dorian Gray being the obvious example. I bring this up only because this immediate area seems to bring out the best (Or maybe worst?) in Irish writers. I’ll explain as we move along.

Next up in Merrion Square is Bernardo O’Higgins, as oxymoronic a name as you will find in modern history. He was the liberator of Chile and as far as I can determine, despite his surname, never set foot on Irish soil. Here he is in his military finery, something that South American generals excel at, if not exactly at leading. The Chileans were so thankful for their liberation that they exiled Bernardo to Peru for the rest of his life.

Jerome Connor was a very talented Irish sculptor who practiced his craft principally in the United States, but left one indelible piece of work that might be considered the heart and soul of Ireland. This is Eire.

The last person we are going to visit inside the Merrion Square park is probably the most famous of all the Irish independence fighters, at least Liam Neeson tried to make him so in the movie of the same name. Michael Collins is a controversial figure in recent Irish history – revered by most, but vilified by many. I have to think it was someone from the latter group who got the commission for this bust. If the sculptor was trying to make Collins look like he was descended from a duck then he succeeded very well. Besides it looks nothing like Liam Neeson.

Time to leave the Merrion Square park and walk along the streets that run around and off the square to get some pictures of those famous doors. And here they are.

This is a really good example of why these doors are so iconic. First you have the bold, brightness of the door itself with brass number, under which there is a brass knocker and then the one brass door handle in the middle of the door. The door is flanked by four columns, two small and two larger upon which sits a pediment. Atop that is an arch which contains within it the traditional webbed glass. The final touches are the two cast iron boot scrapers on either side. The sum of the total is greater than the parts as it creates an eye-pleasing symmetry that is hard to define, but definitely makes one think “Now this is a door!”

Even white on white looks OK.

Here’s an example of why you shouldn’t tamper with the original design. The door on the right has maintained the web window while the one on the left has replaced it – why?

It’s not just famous doors associated with the houses surrounding Merrion Square, a lot of famous people lived here as well including Daniel O’Connell, another guy also known as The Liberator who coincidentally or not ended up dying outside the country he helped liberate. He lived at 58 Merrion Square in a property now owned by Notre Dame University.

Earlier in this post I mentioned that the area seemed to bring out the best in writers of creepy stories. Well if you really want to have the s*** scared out of you then pick up some of the short stories by this guy who lived in Merrion Square as well. Sheridan Le Fanu wrote the first great vampire tale, Carmilla well before Bram Stoker introduced us to Dracula. I remember reading it as a young teenager and literally shaking in terror, but unable to put it down.

Speaking of Bram Stoker, he just happened to live in this area as well, although a little way off Merrion Square. There must have been something in the water.

Time to get back to the hotel and pick up the clubs for the first round of golf. See you on the Royal Dublin Golf Club.