After a great night’s sleep amidst the Appalachian forest at Yamaska National Park it’s time for my son Dale and I to try something neither of us has done before – taking a chairlift up and biking down a ski hill and after that visiting Granby Zoo. But first we need a hearty breakfast and I’m told there is no place better than Le Cafe de la Bruliere in nearby Granby. Even before that I need to shoo away this leaf hopper that has taken a liking to our vehicle.

Le Cafe de la Bruliere has a wonderfully quiet setting on the banks of the Yamaska River. It has been designated as Cafe de Village which is a newly established system in the Eastern Townships for letting tourists know where they will find top quality local food prepared in a healthy and sustainable way. It certainly takes the stress out of picking a restaurant in an unfamiliar town.

We are seated outside on a patio by the river which couldn’t be more pleasant as we are served some really good coffee (the name means a place where coffee is ground) followed by eggs benny to die for.

This is my choice with asparagus. Those are real home fries, not the crap that comes out of a McCain’s bag. And after telling Dale that the Eastern Townships are famous for Brome Lake duckling he goes for that in his eggs benny. 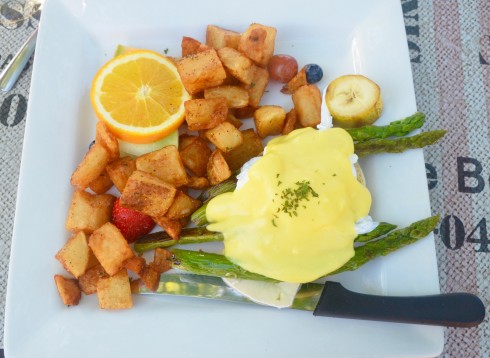 This is the interior of Le Cafe de la Brulerie with many, many types of coffee for sale and on the way out I notice that they are doing a brisk business.

The next place we are headed has had Dale excited since I told him about it yesterday morning. It is the hill at Ski Bromont which is quite visible for miles around the Granby area. You might wonder what the big deal is – it’s a ski hill that has no snow, right? Correct, but it has a couple of lifts running and dozens of trails open. For what? To bike down them, of course.

We arrive at the hill just before opening and I can see that the parking lot is starting to fill up already. Parents are dropping off teenagers with bikes that have huge tires, much bigger than mountain bikes. People are dressed really weirdly – some have suits of upper body armour and look like they came straight out of a Mad Max movie. I say to Dale, “I thought we were just going mountain biking?” He replies, “It’s a bit more exciting than that Dad.” Oh.

I have reserved rental bikes, but before getting them we are fitted for shin and elbow pads not much different than those used in hockey, as well as a helmet. The bikes have heavy duty suspension and huge tires. They each require a $500.00 deposit as they are apparently worth almost $3000.00 each. Dale tells me you can spend up to $10,000.00 for a bike that is used for one purpose only – going downhill as fast as you can. To his credit the rental guy, whose English is quite good, asks if I’ve ever done this before and when I say no he gives me the do’s and don’ts. Don’t hit the brakes too hard or you’ll fly over the handlebars. Don’t brake on curves or you’ll slide out. Don’t fall or you might break your neck. But Do have fun. Yeah, sure.

So here we are ready to go. A son who is looking forward to it and a father who is too stupid not to realize that, to paraphrase Cormac MaCarthy, this is no sport for old men.

The first part is actually a lot of fun. Attendants put our bikes on racks behind the chair lift and we have a nice ride to the top of Mount Bromont. It’s a beautiful day and we can see for miles and miles. At the top we have multiple choices.

Contrary to what I initially thought, the bike trail system is completely different from the ski trail system. The bike trails are much narrower and criss-cross the mountain on the way down, or at least any of the ones I’m going to try. We opt for the green trail on the far right which the rental guy has told me is the easiest way down. So after letting a number of crazies tear by us at what are literally breakneck speeds, we are off.

Going downhill on a bike might seem easy, but when the surface is loose gravel and jagged rock and the track is narrow and constantly curving, it ain’t that easy. In fact it’s downright scary, at least until I get the hang of the brakes and Dale gives me a lesson in how to bank high on the curves like a NASCAR driver. Here I am rounding a curve in beginner form.

It takes a lot longer to get down these trails than it would on a ski trail and after essentially snowplowing my way down the equivalent of the bunny hill I survive the first run.

I can’t help but thinking that you can’t learn to ski without falling and the same thing must apply to this kind of biking. The only problem is that it isn’t snow I will be landing on, but rocks or if I’m lucky just gravel. Dale is itching to try some of the ‘real’ trails and I’m not, so we compromise. I’m going to the zoo and he’ll stay here.

The Granby Zoo is the best in Quebec and one of the top ten in North America, so I was not about to pass it up in favour of potentially killing myself at Mount Bromont. It’s turned into a blazing hot September day and it seems like every young family in the area has decided to go to the zoo. I have always been a great zooaphile, if there is such a word, and don’t share the beliefs of those who think that they are places of imprisonment for creatures that should be left in the wild. That is borne out by two of the first animals I see.

This is a magnificent white rhino who almost certainly would be killed in the wild for those two horns so that some trogolodyte in Yemen could make them into a ceremonial dagger. Likewise this African elephant for his tusks. Instead he gets to play with his basketball at the Granby Zoo.

I’m sure this meerkat is quite happy that all he has to keep a lookout for is gawking humans rather than hungry jackals and hyenas.

Even giraffes are actively hunted in Africa just for ‘sport’, so this one crunching contentedly on a mouthful of hay, has no idea how lucky he/she might be.

I spent a good two hours at the Granby Zoo and still didn’t see all the displays, but I certainly did see that it has a great collection of endangered animals, including a wonderful silverback mountain gorilla who was a bit camera shy. This Japanese macaque, who was one of a number in a large colony, was not.

I also find out that hippos sleep underwater. Who knew?

All too soon I have to return to Mount Bromont to pick Dale up at the agreed time. He has had a great afternoon after hooking up with a young Quebec teenager who spoke little English, but was able to take him on a tour of all the best (a.k.a. scariest) trails.

We returned to our campsite at Yamaska National Park where Dale has a swim and I just chill out, glad not to have any broken bones. Another day of fantastic experiences in La Belle Province.