In the summer of 2018, after driving the North Coast 500, our small group concluded our extensive tour of Scotland with a visit to Ayrshire on the west coast of the Scottish lowlands. The purpose in going here was twofold. First, Ayrshire is the ancestral home of the Dunlop family and the name is everywhere in the area. There is even a town called Dunlop which has origins going back to the 13th century. The second was to visit the Robert Burns Museum in Alloway to see the famous cottage where he was born and other sights associated with Scotland’s most beloved poet. It turned out to be a great decision as the Robert Burns Museum is certainly one of the most informative, up to date and interesting museums in Britain. I can’t think of any museum dedicated to a writer any where in the world that is better. Here’s why I loved it.

Despite the place being named the Robert Burns Museum, everybody refers to the great poet as Robbie Burns. He was born in Alloway, which is now a suburb of Ayr, a small city not that far from Glasgow. The son of a farmer, he too took up that profession and it serves as the inspiration for many of his best known poems. However, Burns was first and foremost a Romantic before that generation of English poets ever were given that epithet. Quite simply he loved wine, women and song and probably in that order. He started writing poems as a teenager and never stopped. He was literally an overnight success with the publication of Poems, Chiefly in the Scottish Dialect and the money he made from it stopped his planned emigration to the West Indies. But he was not a wise man with money and blew it on wine, women and song. His life was short, only 37 years, but in that time he created a body of work in song and poesy that is second to none. Perhaps no other literary figure other than Shakespeare is more well known, revered and celebrated than Robbie Burns.

After his death his writings turned him into a cult like figure and Burns’ societies and monuments started cropping up all over the world. The statue above in the city of Ayr has been duplicated many times around the world including my city of Halifax, Nova Scotia where I can see it in Victoria Park from my office window. Every January 25 a loyal group of followers gathers here and at all the other Burns monuments to honour his legacy and follow it up with a traditional ‘Burns supper’ where a haggis is ceremonially cut open as his poem To a Haggis is read.

In 2009 Robbie Burns was voted  “The Greatest Scott” on a TV contests similar to ones held in many countries, including Canada. We chose Tommy Douglas and I know if you are not a Canadian you are thinking, “Tommy Who?” So it’s little wonder that the Robert Burns Museum is one of the most popular tourist attractions in Scotland.

For well over a century Burns’ fans have been coming to Ayrshire to visit the cottage where he was born. His fame was such that it was recognized almost from the time of his death in 1796 that it should be maintained as a shrine to the Scottish national poet. However, the cottage is small, cramped and can’t accommodate many visitors at the same time. By the turn of the 21st century the Scottish National Trust decided to build a true modern museum on a site not far from the cottage which could better pay tribute to Burns’ life and works. The Robert Burns Museum opened in 2010 and now encompasses six distinct sites all of which any visitor should make sure to see. I will start with the museum proper.

The admission fee of £10.50 gets you into all six sites although technically if you just want to visit the grounds where four of the six sites are located you could do it for free.

As you can see the museum is in a modern architecturally pleasing building that is spacious inside and includes a very well stocked gift shop and a good cafe.

This is the first thing you see upon entering, a bust of a very young and handsome Robbie Burns.

In the main exhibit area there are some very well displayed items like Burns’ writing desk with pages of his poems and songs flying in the air around it.

And this look inside his brain.

And this jukebox upon which you can play his greatest hits.

There is a mural with Burns seated in the middle of group of equally deceased historical celebrities, each with their own beverage of choice. Whether Robbie would have chosen to be seated between Elvis and John Lennon we’ll never know, but the idea behind this is pretty neat and they could have left Che Guevara out and nobody would be the sadder.

There is a great variety of Burns’ actual writings including much correspondence. It’s easy to forget that it was not that long ago that people actually wrote letters to each other to express their feelings – now we just tack on a stupid emoji.

Of special interest to me were Burns’ letters back and forth between himself and Frances Anne Wallace Dunlop who was a big supporter of him. They became such close friends that he named his second son Francis Wallace Burns after her. 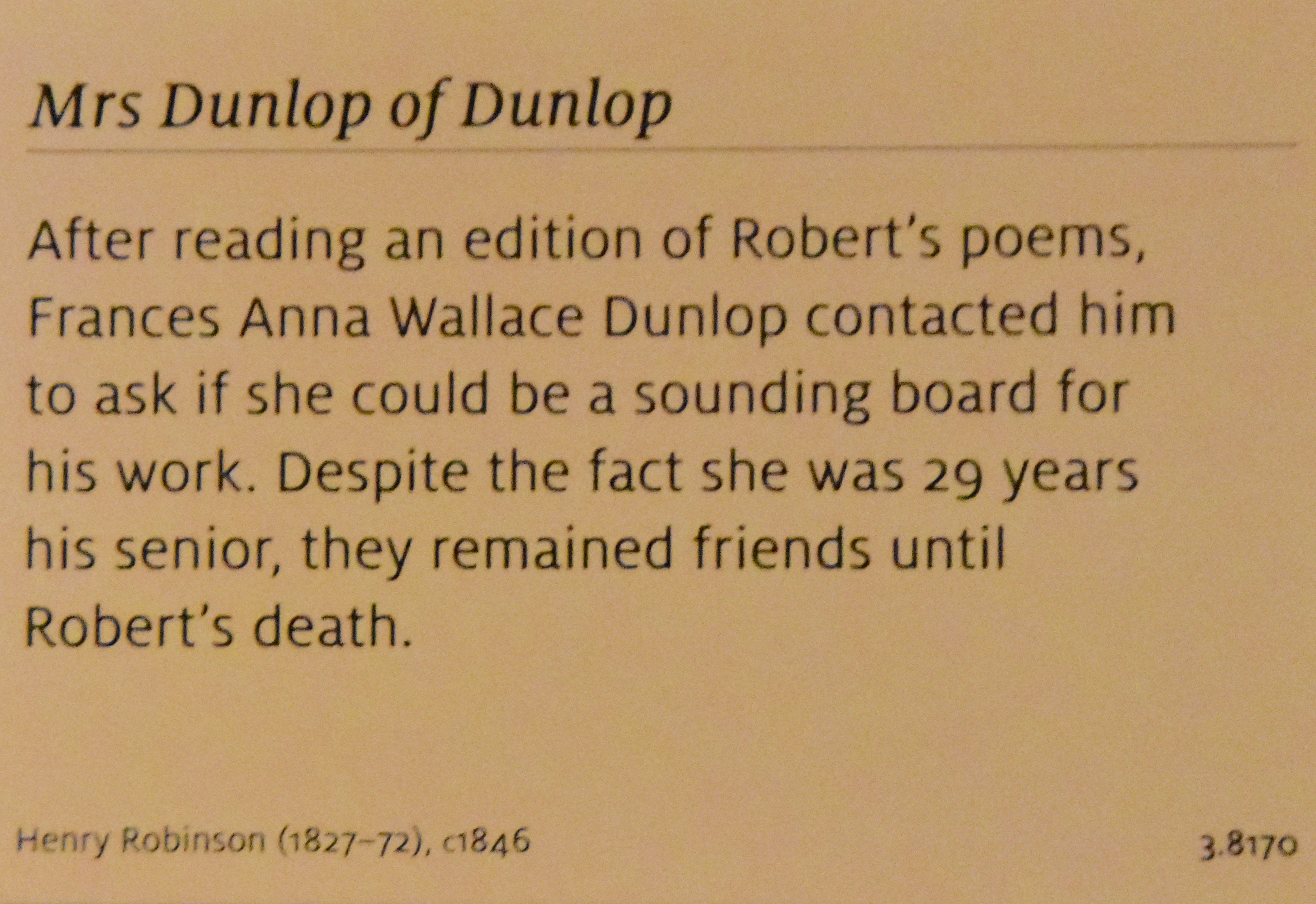 One of Burns most famous poems is Tam O’Shanter which describes a series of drunken misadventures that culminate with a run in with the devil and his minions. These lovely detailed wood carvings depict scenes from the poem. The top carving depicts the debauchery taking place in the deserted Alloway kirk which is just across the street from the Robert Burns Museum. The lower one shows Tam O’Shanter just making it to the Brig O’Doon which his other worldly pursuers cannot cross. That too is very nearby and forms part of the visit to the entire museum complex. So let’s go there next.

Leaving the museum you follow a path to Brig O’Doon that is bordered by this beautiful red, red roses in obvious tribute to one of the greatest love poems ever written.

BY ROBERT BURNS
O my Luve is like a red, red rose
That’s newly sprung in June;
O my Luve is like the melody
That’s sweetly played in tune.
So fair art thou, my bonnie lass,
So deep in luve am I;
And I will luve thee still, my dear,
Till a’ the seas gang dry.
Till a’ the seas gang dry, my dear,
And the rocks melt wi’ the sun;
I will love thee still, my dear,
While the sands o’ life shall run.
And fare thee weel, my only luve!
And fare thee weel awhile!
And I will come again, my luve,
Though it were ten thousand mile.
All around the Robert Burns Museum sites there are these really nice, if slightly rusted in some cases, metal signs depicting scenes from Tam O’Shanter.
I know I took pictures of Brig O’Doon, but they seem to have disappeared – maybe there is something really mysterious about the place. I got this picture from British Heritage.

It really is a pretty bridge with a great view from the apex.

Ordinarily the next place to visit would be the Burns Monument which is a recreation of a Greco-Roman temple built over 200 years ago on a site by the river Doon. Unfortunately when we were there it was covered in scaffolding as major repairs were underway to alleviate water damage that was threatening to ruin it if not immediately addressed. My understanding is that those repairs are now complete and on your visit you should see this.

On the pathway you will come across these two life size figures of Tam O’Shanter and his drinking buddy Souter Johne.

If there was ever a place that almost certainly has to be haunted it must be Alloway Auld Kirk where Burns placed the devil’s dancers in Tam O’Shanter.

Already abandoned in Burns’ time it contains the graves of his parents. Note that his mother outlived him by twenty-four years.

Continuing the Dunlop/Burns connection we also found a few of my distant relatives including Keith Dunlop who contrary to what one might think, was a woman and not a man. She was the youngest daughter of Burns’ friend Frances Anne Wallace Dunlop and was interred here in 1858, long after the kirk was abandoned.

Next you follow a very nicely maintained walking path that leads from the Robert Burns Museum to the Burns cottage. It is aptly named Poet’s Path and contains a number of sculptures and signs including this wicker one of Tam O’Shanter riding for his life.

There’s also a giant haggis which makes a very suitable spot upon which to sit for a photograph. Instead of To a Haggis it’s ‘On a Haggis’.

The signs along the path are newer than the older iron ones that rust easily. These appear to be stainless steel or aluminum.

The last stop on the tour of the Robert Burns Museum sites is the cottage where Burns was born. You are given a guided tour, but can lag behind and get photos with no one else in them, like this one which is the actual bed in which he and three of his siblings were born. When they talk about birthplace they mean it literally.

Burns didn’t just share the cottage with his family. In those days these farmer’s cottages would be divided between the side where the people lived and the side where the animals lived, called the byre. Must have made for a real nice smelling atmosphere.

Actually the human side of things looks quite cozy.

This was the main room where meals were taken.

Expect to spend the better part of a morning or afternoon at the Robert Burns Museum and expect to come away with a greater appreciation as to why this Scottish farmer come customs collector who lived only 37 years is still as widely read and beloved as he was over 200 years ago.

If you’ve got a car and a decent GPS or map there are a couple of Burns related places worth seeking out. The first is the village of Tarbolton where you’ll find the Burns’ Bachelors Club which was a debating society of which Robert Burns was a founding member. It’s now owned by the Scottish National Trust.

Also in Mauchline you’ll find the graves of four of their children. Infant mortality was a fact of life in Burns’ time, but it still could not have been easy to move on after losing four. Actually six of their nine children died before reaching adulthood.

There are many more Burns’ sights in and around Ayr and one could spend a week visiting them all, but if you have time for only one visit it must be to the Robert Burns Museum.