They say that all good things must come to an end and so it is with this being my final post on the fabulous Adventures Abroad trip to Namibia, Victoria Falls and Botswana. In the last post  I described how we got from Victoria Falls to the remote Xakanaxa bush camp in the Okavango delta and on the first game drive met up with the magnificent Danko, the alpha male leopard in this area. Today we got up with the rising sun to attempt to see if he was still in his solitary tree or had moved on. Won’t you join Alison and I and our guide Pound as we spend our last day in this African paradise?

The three of us headed for Danko’s tree well before breakfast in what Pound expected should be a good day for seeing wildlife, particularly large birds. If you are familiar with my previous posts on Africa you will know that I am a lifelong birder and find that seeking out new life list birds is just as exciting as seeing the big game. It turns out that this morning was a birding bonanza starting with this pair of red-billed hornbills. They are quite common in Botswana, but I never get tired of seeing their exotic appearance.

Although it was the dry season in the Okavango, there were still plenty of wetlands and as we approached a marsh near Danko’s territory we saw an increasing number of storks, egrets and other large wading birds starting with this pair of saddle-billed storks, surely one of the most distinctive birds in Africa.

Next up were a couple of life listers for me starting with this slaty egret.

Followed by this much larger yellow-billed egret. I’m always amazed at how birds like egrets, herons and especially flamingoes like to use one foot, when two would seem to make more sense. This guy was doing his balancing act atop a dead tree a good eighty feet in the air.

Next we came upon an ominous sight – a tree full of marabou storks, one of the creepiest looking birds on the planet and a sure sign that something was probably dead nearby.

And sure enough, using the storks as a predictor of demise, there was Danko in his tree feasting on a red lechwe which he must have killed sometime between the time we left him at dusk and dawn. We also caught a fleeting glimpse of a hyena fleeing into the bush as we approached. Pound explained that hyenas, jackals and marabou storks like to hang around under the tree where there is a leopard kill and snap up whatever body parts might fall to the ground. 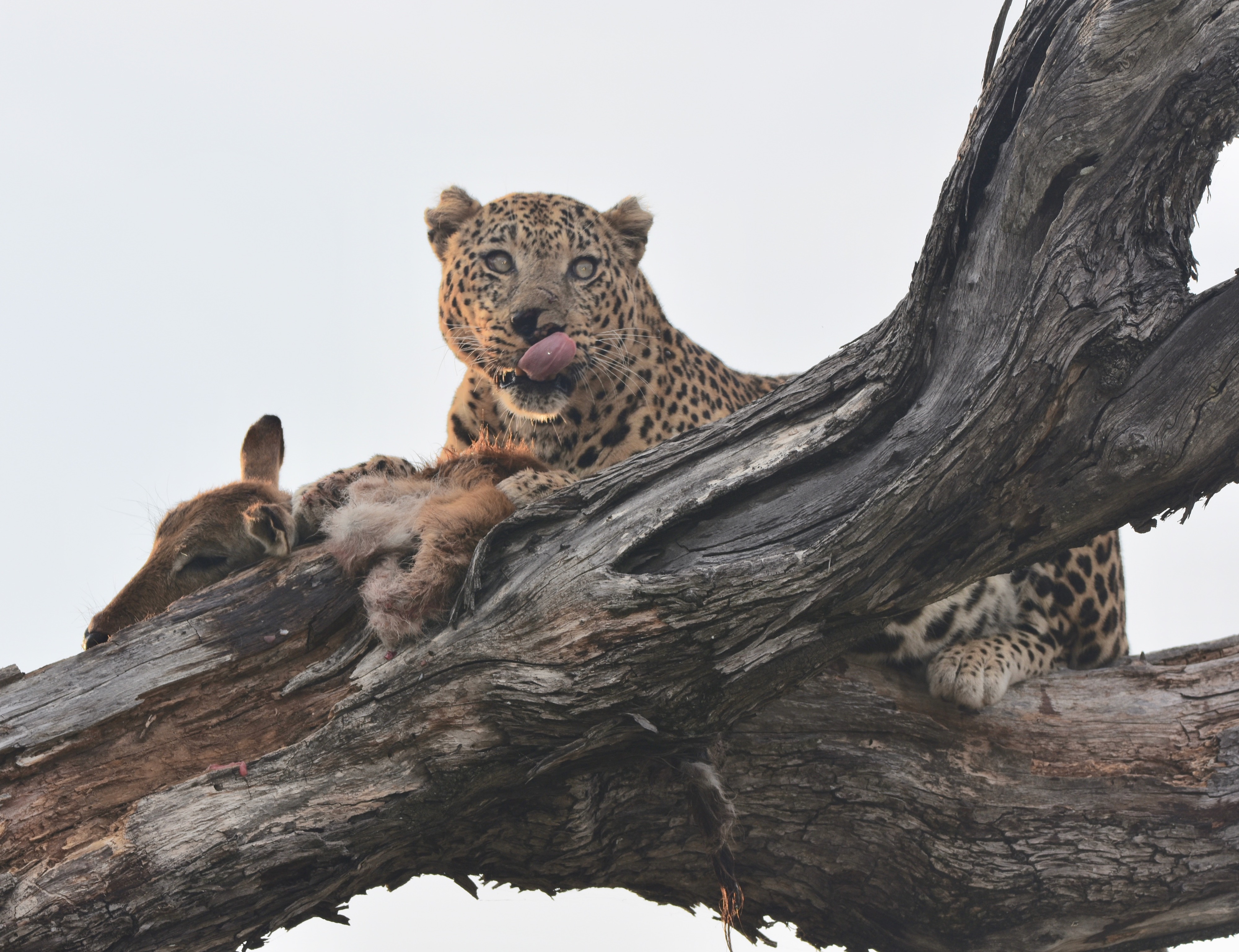 For some reason Danko seemed most concerned with eating parts of the lechwe’s head and we could hear the distinct sound of his teeth crushing the skull of the unfortunate beast. Just as last night, he looked straight at us and paid us no heed even though he could have leaped into our open vehicle in a flash. We were glad his dietary requirements were satiated.

After watching him for about half an hour, Danko was apparently full and simply dozed off, using the remains of the lechwe as his pillow.

For me, this marked the highlight of our game viewing in Botswana. Seeing a leopard in the wild is rare enough, but seeing him with a fresh kill is even rarer, but it was time to head back to camp.

On the way we came by this red lechwe that had survived the night. They are pretty little antelopes and endemic to the Okavango delta.

We also came across a pair of bachelor male impalas. The dominant impala male might have a harem as large as fifty does, but these guys were destined to remain single until they had the strength to take over the throne.

There was one scary moment with a lone elephant that had his ears out from his body which is a standard intimidation tactic signalling a possible charge. Pound gunned the Land Cruiser and we got out of the elephant’s way asap.

Two majestic looking yellow-billed storks flew by as we neared the camp – another first on this trip.

After breakfast Pound asked us if we wanted to take a spin on the River Khwai, the one in Botswana and not the one in Southeast Asia and we readily agreed. Here’s a short video showing how similar this experience is to taking an airboat cruise in the Everglades.

In truth, we did not see a lot of wildlife on our water journey, but I’ve just being on the water was a treat. The most common bird was the African jacana which can almost literally walk on water, thus its sobriquet, ‘the Jesus bird’.

Even without a lot of wildlife there were some interesting plants such as the diamond-shaped leaves of the trapa natans which you might know as the water chestnut.

And who ever gets tired of water lilies?

Pound got an alert on his walkie-talkie that one of the camp’s guides had spotted one of the rarest large animals in all of Botswana, the African wild dog aka Cape hunting dog or painted wolf. We immediately headed back to camp and hopped into the Land Cruiser. These wild dogs are unlike any other species of canines in that they eat almost only meat which makes them a hypercarnivore like lions and our friend Danko. Anyone who has ever had a pet dog will realize there is virtually no food they will not eat including in the case of Labs our family once owned, socks.

The African wild dog has been persecuted by South African farmers for centuries and that, combined with a predilection for picking up diseases from domestic animals, has resulted in a reduction in their territory from as far north as Israel to small areas in Botswana and South Africa. Today it is estimated that there are only around 6,000 of them left so seeing them in the wild is a rarity, but let’s give it a shot.

Pound drove the Land Cruiser as fast as possible including, in a scene right out of Daktari, plowing through a stream deep enough that the water almost covered the hood, but it was worth it. We found the pack of wild dogs resting under the shade with the younger ones playing like puppies. Wild dogs, like wolves, have one dominant monogamous pair that produce almost all the litters. Pound indicated that these two were such a pair for this pack. They look like a happily married couple.

There was also the requisite licking, smelling and nipping that all dogs go in for.

Like Danko, the wild dogs just ignored us as they went about their routines, apparently somehow knowing that unlike many humans, we posed no threat. This was another unexpected treat on this Botswana trip as Pound said that seeing these animals is quite unusual for the camp’s guests as they move around the Okavango a lot.

After about twenty minutes we decided to let the sleeping dogs lie and head back to camp, but doing some more birding along the way. The habitat we found the wild dogs in was quite different than any other we had seen in the Okavango – more thickly wooded with lots of underbrush. Sure enough, it produced a whole new bunch of life listers for me starting with another unusual bird, the African hoopoe, which is so named for its distinct ‘hoop oop’ cry. I’ve seen hoopoes in Europe, but not this African species which stays put all year round and does not migrate as its northern cousins do.

Next we came across a coppery-tailed coucal, one of the largest members of the cuckoo family.

After taking this photo the coucal flew directly at us and I got this shot.

The last life lister was also the rarest according to Pound. The African stone chat as a species is not rare, but across the continent it has evolved into up to fifteen distinct sub-species of which the one in the Okavango is among the rarest. Pound said that he had not seen one for weeks.

As we headed back to camp it occurred to me that we had not seen a single lion in Botswana and almost as if he had read our minds this lion seemed to appear out of nowhere with a look on his face that seemed to say, “So you’re looking for a lion are you? Well I’m coming to greet you.” There was a quick adrenalin spike as he walked straight toward our Land Cruiser, but about ten feet away he turned around and I could almost hear him thinking, “I was just screwin’ with ya.”

From about this point on we kind of went into a daze, knowing that this was the last game drive and it was kind of like coming down from a sugar high to the stark reality of every day life. I can almost go into despair when these Adventures Abroad trips come to an end, but I knew we were flying to Cape Town the next day and that more adventures awaited us there.

In the morning Pound drove us back to the airstrip and we flew to Maun and then onto Johannesburg and Cape Town. I hope you’ll see how we made out there.