It’s a cool rainy morning in Dublin and the weather forecast is not good. There is a vortex of rainy weather swirling around the Irish Sea  drenching pretty well all of Northern Ireland, where we are headed in less than hour. Our destination is Castlerock Golf Club and according to the route I’ve downloaded it’s almost three hundred kilometres – time to clear up? 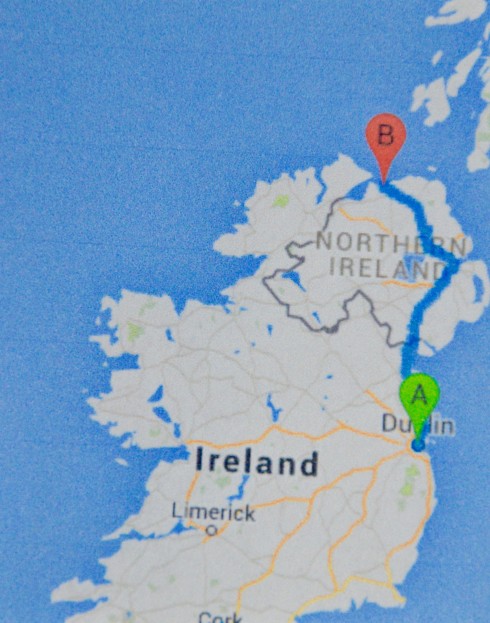 Our 15 seat Mercedes passenger bus arrives, but our driver of the first three days, Willy McBrien has been replaced by the owner of the bus, Barry McGuigan. He introduces himself and we learn that his first name is pronounced Bar – ree and not Bear -ree as it would be in North America. He is a native of Ulster and from his appearance I suspect he might have some leprechaun blood in him. He assures me that he does not share the pugilistic tendencies of his more famous namesake the Clones Cyclone who is a former world featherweight boxing champion. However, he is as quick with a quip or a joke as the boxer was with his fists. Here he is with his wife Sinnead who will join us later in the trip.

Barry will be our driver and guide for the rest of the trip and we are soon wending our way north on the A1 through beautiful pastoral countryside with lots of sheep and the sheep jokes that go with that. This intensifies as we skirt the city of Belfast and pass by the Glens of Antrim which is from where my grandfather emigrated to Canada in the late 1800’s. I make the mistake of mentioning that I still have relatives here who are sheep farmers and that sets off a chorus of innuendo – it’s all in good fun and even Barry joins in. The weather is getting progressively better as we near our golfing destination for the day, Castlerock Golf Club.

As we pull up I can see that we are in for something quite different from the first two days. Whereas Royal Dublin and Portmarnock were quite flat, Castlerock Golf Club looks the opposite. The clubhouse sits on the high point of the course and everything slopes sharply down from there to the River Bann and then along to the where the river drains into the sea and finally back up again to the clubhouse. Originally we had reserved buggies, but the heavy downpour of the morning has made that untenable. Barry, who is greeted by name and a handshake in the pro shop, makes some quick enquiries and he lines up two forecaddies to help guide us around.

The clubhouse is much more modest than the two in Dublin and the atmosphere decidedly less formal. There are a lot of junior golfers on hand and the restaurant is crowded with families here for a Sunday afternoon brunch. We have decided we will have a little competition today, dividing into four two man teams. The format will be a twosome match play scramble. First to go out are Chuck and Peter vs. Mitch and Don. Once their forecaddie shows up they can’t wait to get at it.

I am teamed with David against Brian and Rob. There are 27 holes at Castlerock Golf Club and we are playing the Mussenden 18, so named for the Mussenden Temple which is a prominent landmark in the area.

For some reason our forecaddie has not shown up and we tee off without him, but halfway down the first hole an older fellow (that means older than me) ambles along and introduces himself as Harry, pronounced Har -ree and not Hare -ree. What follows for the next four hours and eighteen holes is hilarious. David and I get off to a good start and go up four holes, but gradually Brian and Rob chip away at it. This is in spite of the fact that they are convinced that we have somehow co-opted Harry into siding with us. They claim that he only looks for our balls in the rough and never finds their’s. My response is “Then don’t hit it there”. The truth is Harry is out enjoying a nice late afternoon walk and he’s not going to let a couple of lousy golfers ruin it.

Castlerock Golf Club is a scenic course to the point of distraction. I found myself constantly looking around at the verdant rolling hills, the dunes, the river, the church steeples and most of all the the outline of the ruined castle on the far horizon. That’s it on the centre left.

By the eighteenth hole, despite Harry’s attempted sabotage, Brian and Rob have tied the match, but we manage to pull it out, not because of Harry, but because we get an easy par and they bogie. They threaten not to pay half of Harry’s fee. Boo Hoo.

The weather has turned nasty again (we got drenched on the 18th) and it is getting very dark so we decide to head out immediately for our hotel for the next three days, the Bushmills Inn. The decision is made easier by the fact that Barry has a good stockpile of Guinness, Harp and Smithwick’s on the bus.

The journey to the small town of Bushmills is along the coast and we pass the ruins of Dunluce Castle along the way.

Four years ago I had passed by the Bushmills Inn on the way to Giant’s Causeway and marked it in my mind as a place to return to. Arriving at the inn I did a double take as it was a lot bigger than I remembered. On checking in I learned that the place had expanded since I’d last seen it, but at 41 rooms it still has the feel of an inn. This is the new section. 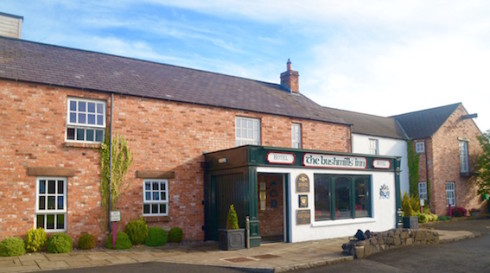 And this is the inn as I remembered it from four years ago. 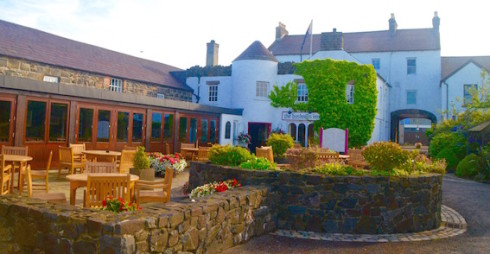 The reception area is everything you could want from a traditional inn and makes a good contrast to the ultra-modern Conrad in Dublin where we spent the first three nights. This a link to the inn’s image gallery.
Our rooms were all ready  and within minutes we are each at our assigned rooms. A nice touch is that each room is named for an Irish whiskey and of course the best room is the Bushmills suite, named for the whiskey made in this town. I certainly felt like one after the 18th hole soaking at Castlerock Golf Club. The rooms while not overly large, have all the modern required amenities except a fridge. Wifi was free and pretty good. Bathrooms were fine. It’s not going to be any hardship spending three nights here. This is the second good choice in a row by Premier Golf, the organizers of this trip.
Probably the best thing about the Bushmills Inn is the terrific restaurant and bar. These are in the older part of the inn which is like a rabbit warren and it took me a while to get my bearings, but that was OK as there are lots of interesting pictures and other things to occupy your attention as you try to find the bar or restaurant. Finding my way back might be a different story.
The meal we had tonight at the restaurant was the best so far in Ireland. The Onion and Guinness soup was a superb starter. Sitting in one of the many nooks and crannies which comprise the bar area with an Irish coffee and a fire burning with great friends was a fantastic way to finish the day. Brian and Rob didn’t bring up Harry’s alleged treachery more than five times and yes, I did find my way back to my room.
Tomorrow we are off to Portstewart Golf Club which Barry promises will be a very pleasant surprise.

“See it before you die!”