The first time I saw Buckingham Palace I was thirteen and very disappointed. Having been raised on a steady diet of Walt Disney imaginings, I expected a palace to look like this.

Having matured (well at least aged), I’ve come to realize that real life palaces have their limitations, but also their strengths – for one thing, they are in fact, real. On a recent visit to London with my daughter Lenore we were fortunate enough to rent an apartment on Buckingham Palace Road and spend a few days in the Buckingham Palace area. It gave me a newfound appreciation of the palace and especially St. James Park, the oldest royal park in London, as we walked through it several times during our stay.

This is the apartment building which was directly across from the Royal Mews, which is a fancy name for the stables. That’s the official Buckingham Palace gift store on the left hand side. 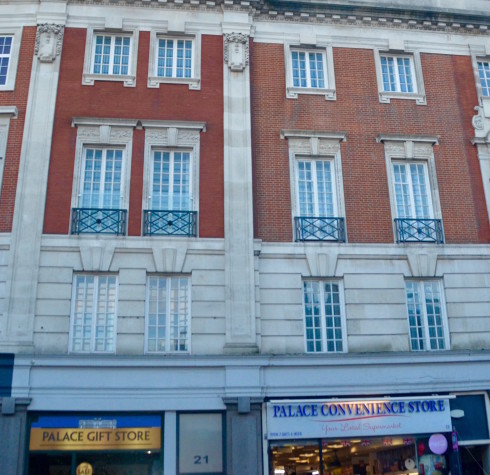 The entrance to the Mews has this pediment of Hercules subduing a couple of savage looking horses.

From our apartment door it was only a short walk to Spur Road and the Victoria Memorial from where there is the best view of Buckingham Palace. The place has gone through numerous architectural changes over the centuries but what you see today has essentially been the principal British royal residence since Queen Victoria’s time. While it might not be as grand and ostentatious as Versailles or the Belvedere, it has clean symmetric lines and exudes strength. You can imagine that Queen Victoria reigned over the largest empire in world history from this very building.

Speaking of Queen Victoria, here is her memorial, which somewhat surprisingly, was not erected until well after her death. I guess that’s why it’s a memorial and not a monument.

It was a beautiful Sunday morning when we approached the front gate and I was able to get a nice picture of Lenore about to drop in for a visit with the Queen at Buckingham Palace.

Of course, unless you are one of the 50,000 or so invited guests every year, you can’t just drop in, although I was impressed by the fact that you could just waltz up to the front gate without any evident signs of excessive security; contrast that to the White House. Lenore didn’t get to see the Queen today, but in a somewhat ironic twist, a couple of hours later we were on a tour bus that got stuck in a traffic jam caused by the fact that the Queen was attending church nearby.

From the Victoria Memorial you can enter St. James Park, which we did. In Home Thoughts from Abroad Robert Browning penned the famous line, “OH, to be in England now that April’s there”  and although this was February and not April, you wouldn’t know it as the park was carpeted in flowers. I’ve been to England enough to know that the daffodils and primroses that were out in February were at least a good month ahead of schedule. Chatting with some of the passersby, most of whom where walking dogs, we learned that London had not really experienced any true winter weather this year (2015-16). Despite the fact that this was undoubtedly a sign of global warming, nobody was complaining this glorious morning. Here’s one of my favourite views of Buckingham Palace from the bridge over the pond in St. James Park.

Speaking of daffodils, my all time favourite Wordsworth poem is I Wandered Lonely as a Cloud with one of the best opening verses in all poesy,

I wandered lonely as a cloud

That floats on high o’er vales and hills,

When all at once I saw a crowd, A host, of golden daffodils;

Beside the lake, beneath the trees, Fluttering and dancing in the breeze.

Here we were, beside a lake, beneath the trees and this is what we saw, fluttering and dancing in the breeze. Oscar Wilde would have approved of this example of life imitating art.

The primroses and English daisies were pretty spectacular as well – I mean this is February! 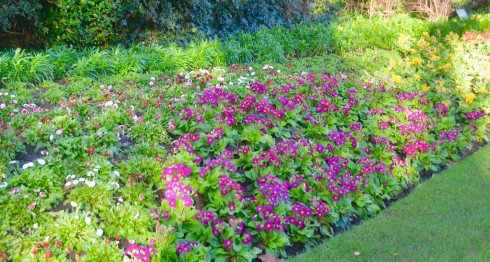 At the far end of St. James Park you’ll likely find four of the park’s most famous residents – these Great White Pelicans.

The pelicans are not native to London and are apparently descendants of the first pelicans which were a gift from the Russians in 1664. They were certainly not camera shy and quite gregarious. I knew that the Tower of London had its ravens, but not that St. James Park had its pelicans.

Just by coincidence, a month earlier and thousands of miles away I had come upon a huge flock of white pelicans on Indian Key in the everglades.

At the far end of St. James Park you come to the Horse Guards Parade complex which includes Old Admiralty House past which the Horse Guards parade in one of the most colourful of British military pageants. It serves no useful purpose other than to carry on a tradition that most everyone enjoys. 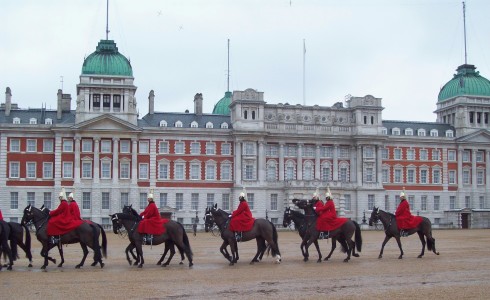 There are those who would abolish the monarchy and do away with these, to them, fusty traditions and use the money saved to help the poor. Only problem is that Britain makes more money from the tourism dollars generated by the Royal family and these type of antiquated ceremonies than it costs to support them. Besides, wasn’t it Jesus who said, “The poor will always be with you” and who am I to gainsay that? Doing away with the traditions will just mean we don’t have the traditions anymore and the comfort they give to a lot of people. It wouldn’t make things a whit better and probably, losing these links to the past, would make things worse.

So that’s it from Buckingham Palace. Cheerio, it’s time for tea!