This is my second post on a 2016 tour of Canadian WWII sites in Italy led by my friends at Liberation Tours. In the last post I described the lead up to Operation Husky, the WWII invasion of Italy by the Allies and the various Canadian regiments that were about to take part. In this post I’ll finally get us on shore in Sicily with the landing at Bark West Beach, but first, two more preliminary matters that are very important to the story.

Everybody knows that the Brits are the best writers of thrillers that involve spies and counterspies, agents and double agents, deceptions, ruses and bluffs. Think no further than John LeCarré, Len Deighton or my personal favourite, Eric Ambler. It may well be because, in real life, they are or at least were, absolute masters of deception during WWII. The most famous deception was the use of thousands of dummy tanks and other fake war materiel to convince the Germans that the target for the D-Day landings was the Pas de Calais and not Normandy. However, for sheer genius and exquisite planning nothing beats Operation Mincemeat. I can do no better than this terse description from the BBC History website:

The two masterminds of the operation were Charles Cholmondeley and Ewen Montagu, two men with what Churchill called “corkscrew minds”. First, they obtained a dead body from a London coroner named Sir Bentley Purchase. Then they set about creating an entirely new personality for the dead man, whom they designated William Martin, a major in the Royal marines. Using false identity cards, faked personal letters, receipts, bills, photographs and other “wallet litter”, they gave the dead man a father, a fiancee and a backstory. But most crucially they chained to his wrist a briefcase containing official-looking documents, letters written from one general to another, which clearly indicated that the Allied armies massed in North Africa were aiming for Greece. These, too, were false.

Montagu and Cholmondeley had a specific target in mind for their elaborate deception: Adolf Clauss, a German spy operating in the port of Huelva on Spain’s south coast. He was known to be efficient, ruthless and extremely gullible.

In April 1943, the body was dropped into the sea from a Royal Navy submarine and then floated towards the coast of Spain.

Operation Mincemeat fooled Hitler completely: German troops were deployed to the wrong place; thousands of British, Canadian and American lives were saved; Mussolini was deposed; and the course of World War Two was changed.

There’s actually a pretty good movie that was made about Operation Mincemeat – The Man Who Never Was starring the underrated Clifton Webb. Worth watching if you can find it.

Mark Zuehlke our tour historian and author of the definite book on the Canadian campaign in Sicily, Operation Husky, explained the importance of Operation Mincemeat to the group as we headed for the landing site at Bark West Beach from our hotel in Catania. By falling for it hook, line and sinker, the Germans left Sicily seriously undermanned and did not have the reserves to shore up their position before it was too late.

Tragedy on the Way to Sicily

While the vast majority of troops who were to land in Sicily were stationed in North Africa or nearby Malta, the Canadians, along with all their arms and supplies, set sail from Great Britain in late June and headed out on a voyage of over 4000 kms. (2500 miles). The Mediterranean Sea was crawling with U-boat wolf packs and on July 4, the U-409 came across the convoy and sunk the converted passenger ship S.S. City of Venice and the freighter St. Essylt, taking over fifty Canadian men with them and most of our tanks and support vehicles. A third ship was also sunk on the way to Sicily. That had to be devastating for morale and no doubt raised the spectre of another debacle like Dieppe. The father of one of the people on our tour was among those who ended up in the water after the City of Venice was torpedoed and at Bark West Beach, she shared her father’s thoughts as he wondered if he would survive this ordeal. He did, but a friend on board did not.

The only good news is that U-409 was also sunk a few months later.

The Landing at Bark West Beach

It’s a two hour drive from our hotel in Catania to the landing site at Bark West Beach, which is on the southernmost tip of Sicily. Our historical interpreter Phil Craig, describes events leading up the invasion of Sicily as we get nearer. The countryside in this part of Sicily is very arid and the soil doesn’t look great. There are some fruit orchards, olive groves and the occasional vineyard, but mostly what I see are dozens and dozens of small plastic greenhouses that I presume are growing vegetables. Towns and villages are few and far between and the roads get narrower and narrower until it seems impossible that two vehicles could pass each, especially if one is a bus. At last the sea comes within sight and we finally stop at what looks like just a tiny cove where a couple of old men are sitting on the rocks looking surprised as hell to see this huge bus pull up out of nowhere. I think to myself, “This can’t be the landing site.”, when Mark shouts out, “We’re here. This is Bark West Beach.” Ok, I guess this is it.

I’m standing on a small rocky outcrop on the shoreline looking due west. Bark West Beach actually extends for miles and in the distance I can see an actual sandy beach. Mark explains that in 1943 the water level was much lower than it is today and the area where we are standing was a beach at that time. This was the landing spot for the Royal Canadian Regiment which made up the right flank of Canadian forces.

The guy on the left is one of the Sicilian men who was lounging around when we arrived. 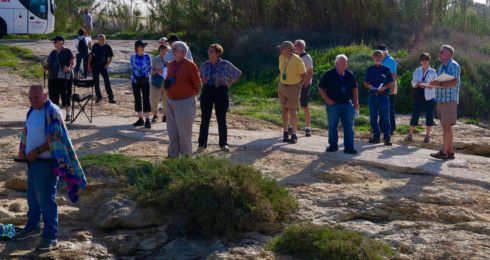 Our First Briefing by Mark

The Canadian landing needs to be viewed in the context of a much larger amphibious landing by British and American forces that all told put over 150,000 troops ashore in one day. There were over 2,500 ships involved and 4,000 aircraft. It was the largest amphibious landing in history, repeat, in history. Larger than the D-Day landings in Normandy. This is just about the very first fact we learn about as we are briefed by Mark at Bark West Beach. It is really the first inkling of just how much of a back seat the invasion of Italy has taken in history to the invasion of France.

I can’t help but think of our visit to Juno Beach in Normandy just over 16 months ago. Not only is there the beautiful Juno Beach Centre to give the history and honour the Canadians who fell on D-Day and the weeks thereafter, but there is an entire tourist industry built around the Allied landings on June 6, 1944. Here at Bark West Beach there is absolutely nothing to recall the landing of 26,000 Canadians on July 10, 1943, even though that is almost 5,000 more than landed in Normandy. I’m beginning to realize why Mark, Phil and John have gone to the great trouble they have to organize this trip. The recognition of the Canadians in Italy is more than overdue and I am glad that I am able to be a part of it.

Here is a map of the Allied landings in Sicily on July 10, 1943. The Americans are on the left in green and the Brits on the right in dashed red lines. We are in the middle in solid red. The ultimate goal for all three was to reach the Straits of Messina at the top right of the map and prevent the Axis forces from retreating across the straits to the mainland.

While Bark West Beach is quiet and calm today, it was neither on July 10, 1943. A gale was blowing and unreconnoitred sand bars caused many of the landing craft to get stuck well away from shore, forcing the Canadians, each loaded down with up to 100 pounds of weapons and gear to plunge in and struggle through the waves in water that was, at times, over their heads. Phil reads a heart wrenching story from Farley Mowat about one soldier who was so terrified and sure he would die, that he simply stepped off the boat and disappeared into the murky water and did not resurface.

Here is a map of the Canadian landing sites at Bark West Beach. The RCRs (Royal Canadian Regiment) are on the right flank with Hasty Ps (Hastings and Prince Edward Regiment) beside them, both tasked with securing the airfield at the nearby town of Pachino. The 48th, the Carleton and Yorks and the Van Doos drive for the town of Burgio. The PPCLI, Loyal Eddies and West Novas constitute the left middle and also drive inland, while the Seaforths and A Company from the Hasty Ps make up the left flank and secure control of the rest of Bark West Beach before also heading inland.

While the landings certainly had their unexpected difficulties, the one upside was the fact that there was next to no enemy resistance. There were a number of reasons for this. On shore batteries and other defensive positions had been pounded by naval and air bombardment prior to and during the landings, some shells landing perilously close to the Allied troops. Despite the fact that there were over 2,500 ships out there, the element of surprise seemed to have been achieved, thanks in part to Operation Mincemeat. Finally there was the question of whether or not the invading armies could actually be considered ‘the enemy’ to the Italian people. More on that in the next post.

Before boarding the bus we gathered for our first group shot, with Bark West Beach in the background.

Time now to follow the RCRs and Hasty Ps inland to the village of Pachino. Won’t you come along?