My daughter Lenore and I recently chose Curaçao as our destination for our annual father-daughter getaway. There were a number of reasons – direct flight from Toronto, escape Canadian winter (duh!) and finding a great place to stay – Landhuis Jan Thiel. However, what sold us on Curaçao was the chance to spend a lot of time on the water. Lenore wanted to see if she could learn to scuba dive and Curaçao was one place that offered lots of options to start from shore rather than having to take a boat out and make your first dive in deep water, like I did. She has sinus issues and didn’t want to spend a lot of money on diving lessons if it turned out her sinuses would act up once she got down more than a few feet so snorkeling Curacao was a possible alternative.

We arrived in Curaçao only to find that the trade winds had started far earlier than usual and the ocean was unusually rough. Here’s a photo of Lenore standing on the 4th floor of Rif Fort in Willemstad and yes that is a wave breaking that high.

So our plans to go fishing, sailing to Klein Curaçao or anything else more than a few hundred feet from shore were dashed. However, that still left snorkeling Curacao or scuba from shore. On our first day we took the rented car and drove to the most westerly point on Curaçao and then made our way back to Willemstad stopping in at all the road accessible beaches along the way, about a dozen in all. What we found surprised us. The beaches were all quite small and invariably in a sheltered cove so that they were protected from the rough seas pounding the exposed coastline, which in Curaçao is about 95% of the coast. Some of the beaches were sandy which made entry easy, but others were rocky making getting the water a tricky proposition.

However, here’s what really surprised us. There were people in scuba gear getting into the water from the shore at lots of places, but so were snorkelers and they were both essentially looking at the same things underwater. I had to ask myself, “Why would I go to the bother and expense of putting on scuba gear when I can see the same things with a snorkel and a mask?” So I jettisoned plans for scuba lessons, saved hundreds of dollars and bet we saw as many great things as the divers did.

Over the next few days we snorkeled at a number of places and for the rest of this post I’ll describe what I thought were the three best.

At the most westerly point of Curaçao, about 40 km. (25 miles) from Willemstad is West Punt where there are a number of beaches including the only one we saw that was actually a working fisherman’s beach, thus the name. Here’s a fisherman cleaning the hull of his small boat.

Here’s something I didn’t know and the reason Playa Piskado is great for snorkeling Curacao – young sea turtles are not just vegetarians but pescatarians as well. When the fishermen bring in their catches and clean the fish, young green sea turtles are there to grab what they can. The turtles don’t just hang around when the fisherman are landing their catches, but are pretty well there all the time – bottom line, if you want to swim with sea turtles, this is the place.

The signs don’t indicate Playa Piskado, but rather Playa Grandi. You’ll know your in the right place when you see the small wharf, the fishing boats and this sign.

The beach is quite small and the entry a bit rocky, but once you’re a few feet out the bottom is sandy and if your just a little bit patient you’ll see turtles. The water is shallow enough that once you find one swimming below, you can just follow it along at a leisurely pace in the crystal clear water. To say that this is a neat experience is an understatement.

Once you get tired of swimming with the turtles (if you do) head to the right side of the beach where the coral starts and you’ll find tons of fish. Surprisingly enough, although there might be a lot of other people here, it’s quite easy to find a spot of your own especially away from the sandy bottom where most people are turtle watching.

Playa Piskado has a number of vendors around so you can buy refreshments or some local food if need be, or bring your own.

I have returned to Playa Piskado a number of times since, but before the pandemic and found it was overrun by cruise ship passengers. I suspect if you can get to the island today and try snorkeling Curacao you might have the place to yourself.

Not far from West Punt heading back towards Willemstad looks for the signs to Knip and turn left. You’ll pass by a famous landhuis which was once the site of a bloody slave rebellion.  It is now a museum and well worth a visit. Follow the road through the landhuis until coming to a point that you can go left or right. Go left a very short distance to  Kenepa Chiki as indicated on the sign, which is Little Knip in English.

Little Knip is your stereotypical Caribbean beach and I mean that in a good way. Its water are aquamarine, crystal clear, clean and absolutely loaded with fish not more than five feet off shore. Unlike most of the good snorkeling Curaçao areas, the entrance is sandy and easy to get into the water. I would suggest this as a place to introduce young children to snorkeling.

Once in the water just take a leisurely swim up the right side of the beach and you will find yourself surrounded by fish in no time. Little Knip Beach is probably the easiest and most enjoyable snorkeling we had not only in Curaçao, but maybe anywhere.

My last suggestion is probably the most popular diving and snorkeling site in Curaçao even though at first sight it seems to be the antithesis of the other two places I’ve recommended. Tugboat gets its name from the fact that there is a sunken tugboat close enough to shore that you can snorkel to it from the beach. However, it also happens to be in the shadow of a massive drillship that has been there for years and at first glance appears daunting. Here’s the view of Tugboat from the top of nearby Fort Beekenburg. Tugboat is on the far side of the wharf where you see the smaller boat anchored between three round structures. 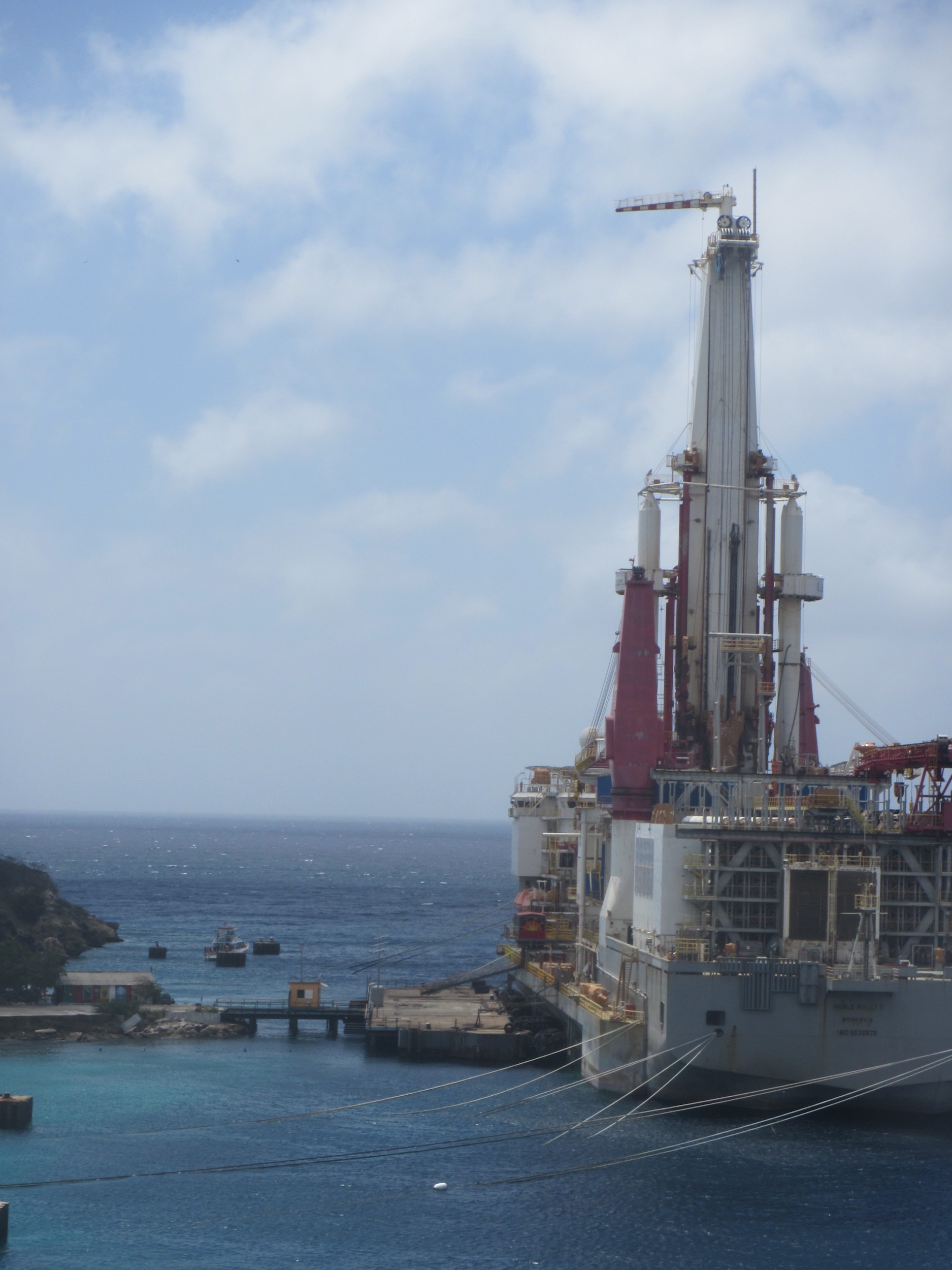 Tugboat is located south of Willemstaad just past Caracasbaii. Once you find your way to Caracasbaii you can’t help but notice the huge oil rig and drillship. Simply keep heading towards it until you find the small parking lot just before the pier that leads to the drillship. There’s a restaurant and bar that you walk past to get to a very small and rocky beach.

This is what you will see as you look around and decide if this is for you or not.

Well the answer is yes, it is a great place to snorkel although the currents here are a bit strong and the tugboat is out in much deeper water than you need to be in at the first two sites I’ve recommended. So if you’re not totally confident in your abilities I would suggest just snorkeling around the areas closer to shore. Amazingly the water here are clear and clean although there’s lots of industrial debris on the ocean floor, like this huge anchor.

There’s also a good variety of fish, but not as many as at Little Knip. However, one way to make sure you’ll always have lots of fish around you is to take in some food for them, like white bread which holds together better under water than multi-grain (at least it’s good for something).

Here’s a photo of fish that I fed at Tugboat. The white things are the bread remnants.

And here’s the tugboat. 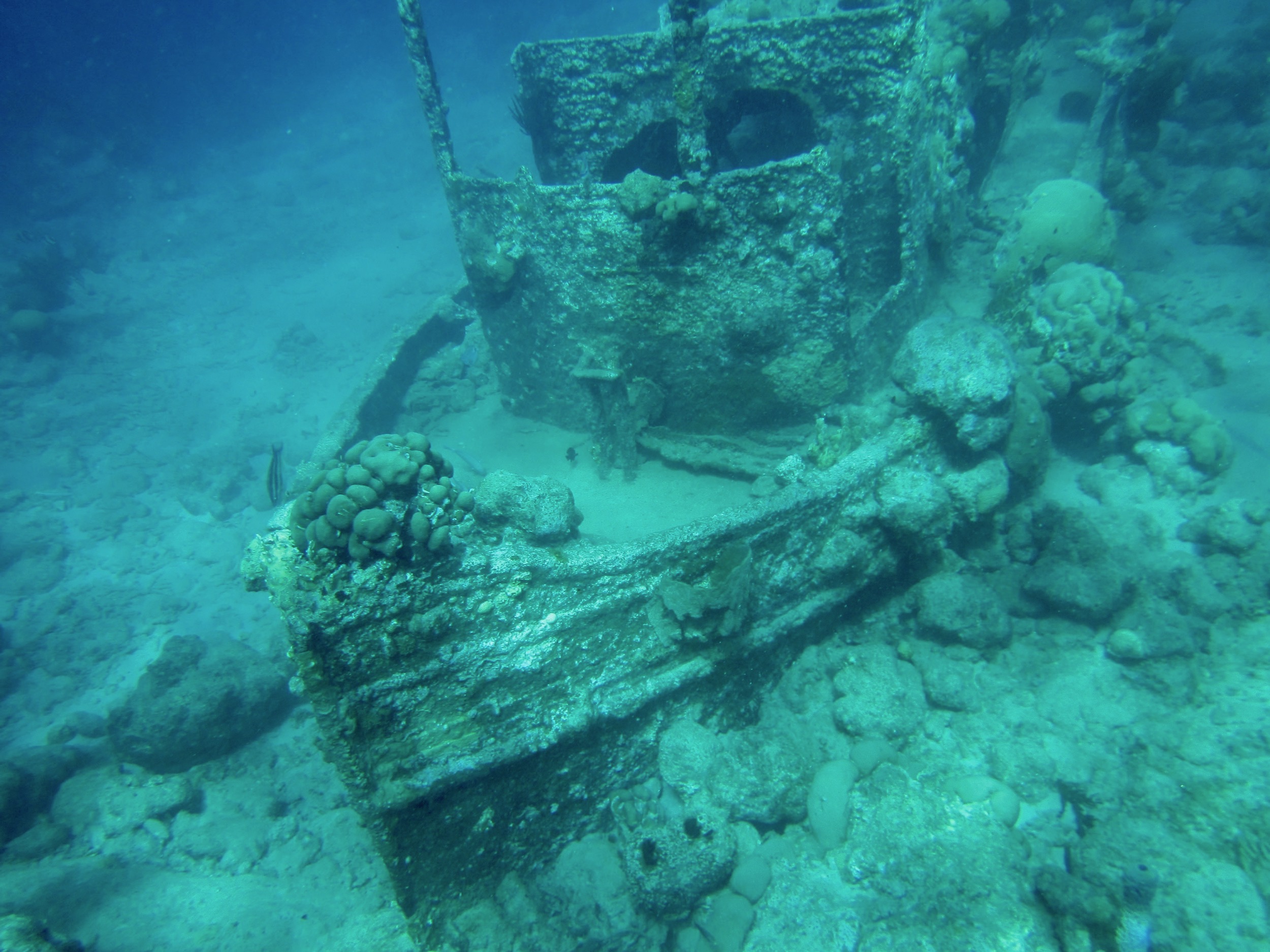 I apologize that I’m not a great or even good underwater photographer, but I hope this post will inspire you to try you hand at snorkeling Curacao from the shore. If it doesn’t, then go to this website for inspiration and a lot more snorkeling Curacao destinations.