Many visitors to Mexico make it a point to see some of the great murals of the 20th century by artists like Diego Rivera and José Clemente Orozco that depict important scenes from Mexico’s history in ways that are understandable to every Mexican, whether literate or not. I know I did in Mexico City by visiting the National Palace where Rivera’s grand murals that surround the walls and stairways are overwhelming. However, the tradition of Mexican mural painting goes back far earlier than the 20th century, in fact over a 1,500 years earlier at a minimum. In this post on the Adventures Abroad Central Mexico tour with veteran guide Victor Romagnoli we’ll visit the pre-Columbian site of Cacaxtla which contains what many contend are the best preserved murals of ancient Mexico.

Cacaxtla (pronounced Ka-cosh-la) lies a short distance outside the regional capital of Puebla where we have been staying for the last few days. On the way, we pick up our local guide Jean-Luis who is an elderly gent who carries a walking stick and is a fountain of information on all things related to the Puebla area including Cacaxtla and Cholula which we will visit next. In previous posts I mentioned that the local guides we have used vary in usefulness. Some are excellent like Jean-Louis while others are less so, either because their English is poor or their knowledge is less than Victor’s, who could double as a local guide almost everywhere we go in Mexico.

Amazingly, the location of Cacaxtla was completely unknown until 1974 when what was presumed simply to be a natural hill was found to be a huge complex that might be the largest palace in all of Meso-America. Archaeologists have been working there almost continually since. What they have found is mysterious and controversial. The site dates from 650  to 900 which was after the collapse of the nearby cities of Cholula and Teotihuacan. Strangely, there are traces of Olmec influence even though they had supposedly disappeared from the scene over 800 years earlier. There are also Mayan influences as well. Just who the people who built Cacaxtla were is still unresolved as is the status of the exactly what Cacaxtla was actually meant to be. It was definitely not a city as there are few other ruins around it that are not strictly ceremonial.

Nearby are the much older ruins of Xochitecatl which you could visit by walking over from Cacaxtla, it is that close.

The one thing everyone agrees upon is that whoever built Cacaxtla, they were a very militaristic society as evidenced by the subject of most of the murals.

The site consists of both an excellent if small museum and the actual archaeological site which is several hundred metres away. Jean-Luis takes us through the museum first where there are reproductions of some of the murals found at Cacaxtla. Frankly, in retrospect, these are much more brightly coloured than the originals and give an idea of how they must have looked when fresh.

Here is one example of a reproduced mural which Jean-Luis uses to explain the overarching importance of corn or maize to the people of Meso-America. Without it, the various civilizations that rose in Mexico could never have sustained the numbers of people who ended up living in the huge cities that the Spanish encountered upon their arrival.

This is a reproduction of what is called the Birdman Mural. The largest mural at Cacxtla depicts a battle between the Jaguarmen and the Birdmen, with the Jaguars winning. No one knows for sure who the Birdmen were supposed to be, but many believe they were Mayans. On the other hand the great demi-god Quetzalcoatl is often depicted something like this and the real bird behind him is almost certainly a quetzal.

Opposite the Birdman is the Jaguarman who is ferocious looking and like Birdman, stands atop either a snake or a dragon. The water dropping from his hand may mean that he is some type of rain or fertility god. Without further discoveries it is unlikely that the definitive solution to who these two guys were, will remain unresolved.

Murals are not the only important artifacts from Cacaxtla. This is a man, probably a priest, wearing a very elaborate costume. It looks like it must have weighed a ton.

More mysterious are these four faces or masks. All four are completely different from each other with the one on the lower left looking very similar to masks from ancient Indonesian cultures.

This is what Jean-Luis described as a devil vase. It may have been used to collect organs, especially hearts, from sacrificial victims.

If that isn’t creepy enough, look closely at these human bones. They were clearly those of someone who had been carved up and eaten. That’s not my conclusion. but that of Jean-Luis. While it is well known that the Aztecs practised ritual cannibalism, these bones date from up to 800 years before the Aztecs ruled central Mexico.

With those pleasant thoughts in our heads we head out for the actual site of Cacaxtla. Along the way you pass poinsettia flowers and are reminded that this plant, so evocative of the winter holidays, actually comes from Mexico.

Equally Mexican are these prickly poppies. Note the little grasshopper on the one on the left.

Over the years I have been visiting ancient ruins around the world I always keep my eyes open for things that can enhance the experience and wild flowers never fail to do that.

This is Cacaxtla. After the terracotta warriors in the mausoleum of Emperor Qin Shi Huang in Xi’an, China, Cacaxtla is the second largest covered archaeological site on the planet. Once unearthed, the murals had to be protected from both the relentless Mexican sun and the occasional rains or they would be destroyed in no time.

Here is a plan of the Gran Basamento that is found at the entrance to the stairs you must climb to get into the place. It sounds weird because, speaking English, the word basamento conjures ‘basement’ and yet this is very opposite of a basement. In fact the word translates more as ‘base’ or ‘plinth’ than basement.

Reading the inscription you learn that this structure built over three centuries during nine distinct construction phases. 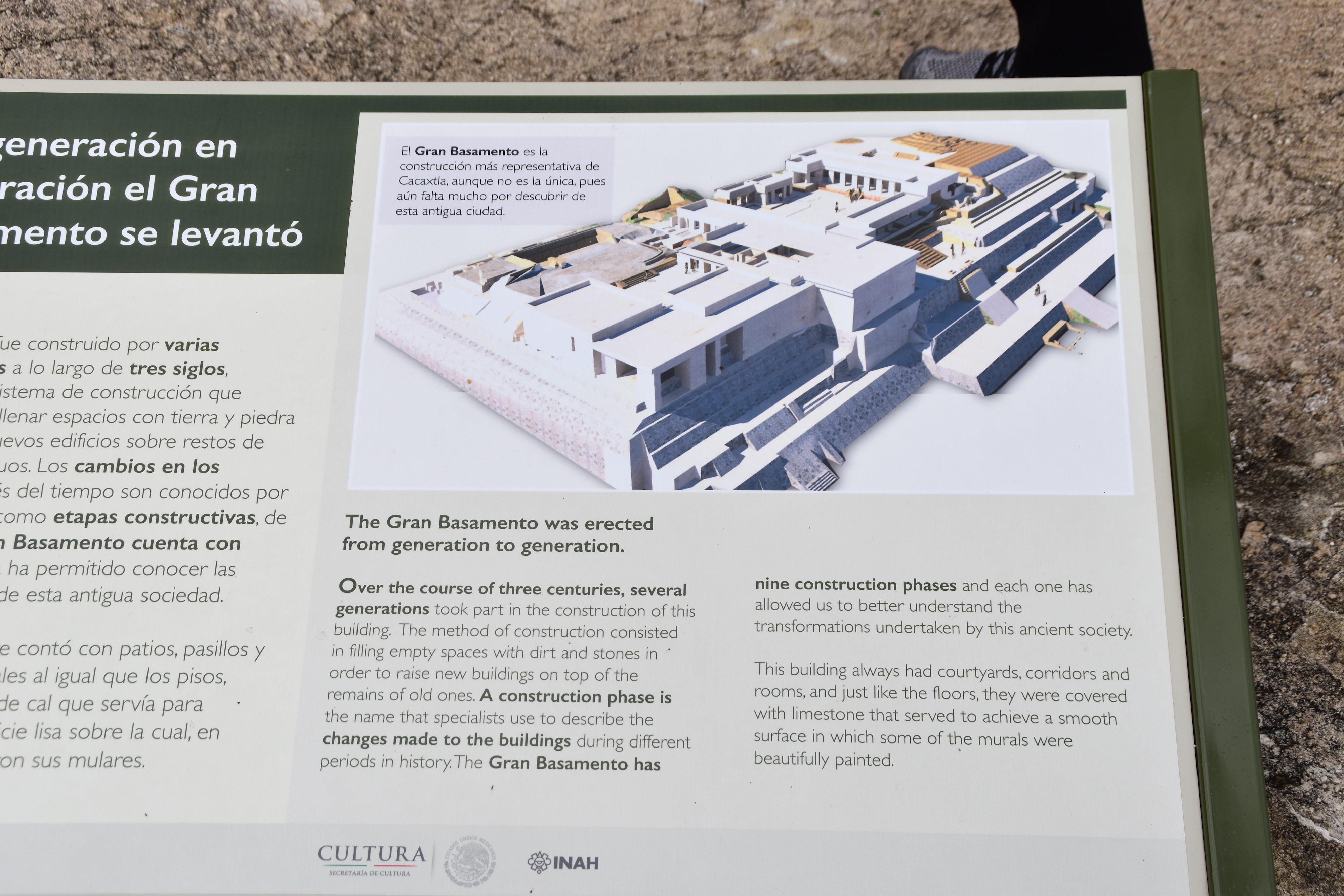 Here’s a better view of how it looked during the final period of Cacaxtla’s ascendency.

This is the third major archaeological site we have visited on this tour outside of Mexico City and like Monte Alban and Mitla there’s almost nobody here. It’s incredible to me how tourists fixate on one or two sites in Mexico like Teotihuacan or Chichen Itza, which are great, but very crowded to the exclusion of dozens of others that you can explore at your leisure without the hordes and those damned selfie sticks.

This is the interior of the Gran Basamento. The wall you see in the centre contains the Cacaxtla Battle Mural which is in two parts divided by a staircase. You can also see that it’s badly faded and nowhere near as bright as the reproductions in the museum. Let’s take a closer look.

This is the view from the North Plaza showing the Battle Mural a little better.

And here’s a portion of the original Battle Mural up close.

Frankly, I was disappointed by the faded condition of the original murals at Cacaxtla, but I don’t blame anyone but myself for that. In preparing for this visit I had listened to an audio lecture on the murals by Professor Edwin Barnhart as part of The Great Courses series titled Maya to Aztec: Ancient Mesoamerica Revealed. Don’t get me wrong; the series was excellent preparation for this trip and I recommend it to anyone contemplating taking this tour in the future. However, I did get the impression that the murals were in much better shape than they really are from the lecture on Cacaxtla. On the other hand, they are over 1,300 years old so the fact they have survived at all is somewhat miraculous.

Still, Jean-Luis did a great job of pointing out the salient features of this and other murals in the Gran Basamento. In the Battle Mural the victorious jaguarmen massacre and dismember the losing birdmen. Nobody knows if this scene depicted a real battle or was just wishful thinking on the part of the jaguar forces. That’s Alison and Jean-Luis in front of the mural which is protected by a glass shield.

This is the original of the Birdman Mural. Contrast it to the reproduction above.

After having the Gran Basamento entirely to ourselves we returned to the entrance to the site where several women had now set up a small food stand and were offering nopales, aka prickly pear tacos.

No way I was resisting that and Victor and I both chowed down on one of the best tasting meals I had in Mexico. Why these are not served in Mexican restaurants in the rest of North America is strange. They are cheap and easy to make and simply delicious.

Next we are off to visit the largest pyramid on earth and we aren’t going to Egypt to do it. Join us as we head for Cholula.