Sadly, this is my final post from Victor Romagnoli’s epic tour through all the countries in Central America for Adventures Abroad . The group has been to Panama, Costa Rica, Nicaragua, El Salvador, Honduras, Guatemala and finally Belize where the trip will end in Belize City tomorrow morning as we all depart for our homes or continue travelling on our own. This final country has been a very pleasant surprise with its impressive Mayan ruins, especially Caracol which we visited yesterday and the wonderful Black Rock Lodge where we spent two nights deep in the Belizean rainforest. We saw plenty of different birds at the lodge, but few of the other elusive creatures that inhabit the area. Victor is going to remedy that today as we make a stop at the Belize Zoo on the way to Belize City. Please join us on this final journey through this tiny country.

Leaving Black Rock Lodge we turn onto the Western Highway which bisects the country midway between the Guatemalan border and Belize City on the Caribbean Sea. This is a good road with little traffic and offers an opportunity to see parts of the country not on most tourist’s itineraries. As noted in my first post on Belize it is a poor country still heavily dependent upon agriculture and many of the traditional rural houses reflect this.

The houses are built on stilts and being far from the ocean it is not to protect from storm surges, but rather to provide shade during the hottest times of year when the inhabitants might sleep under the house and not in it.

We pass by the entrance road to Belmopan the capital city which is singularly unimpressive. In an effort to replicate Canberra or Brasilia, the capital was moved from Belize City to this planned community in 1970. It is the smallest capital city in the Western Hemisphere at just over 16,000 residents. 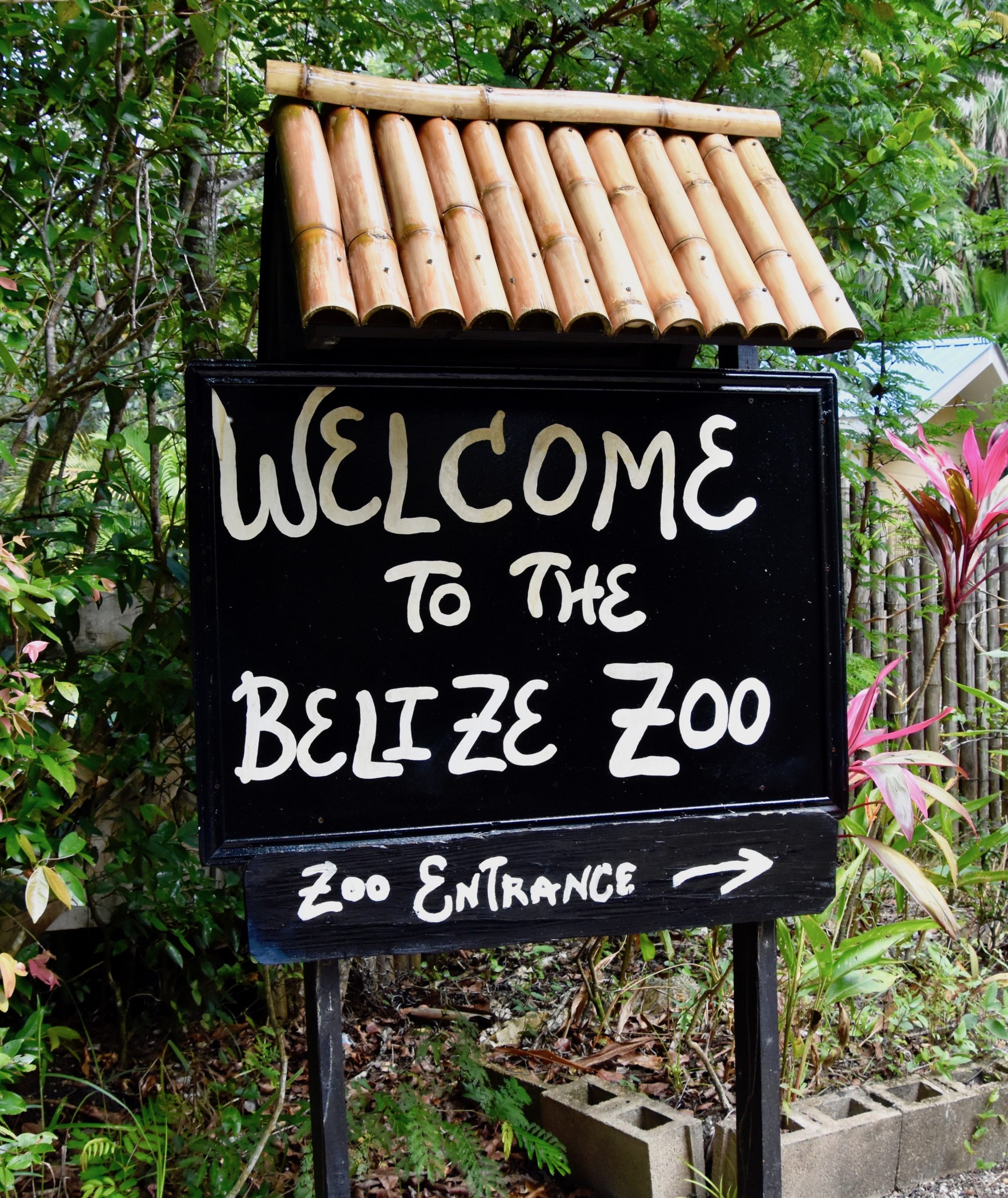 Normally a visit to a zoo would not usually be something you would expect to find on an Adventures Abroad tour, but Belize Zoo is different than most. It is set in a natural environment that has been disturbed as little as possible and the animals that live here have not been trapped for the purpose of putting them on display. Instead these are all native Belizean species that have been unable to make it on their own in the wild due to injury, abandonment or other cause that puts them at risk in the wild. It is closer to a wildlife rehabilitation centre than a zoo.

It also serves the purpose of introducing native Belizean children to the many exotic creatures with which they share this wonderful little country. On the day of our visit, they are here in droves and as per usual with kids at a zoo, they cannot wait to rush from one exhibit to the next, screaming with laughter and awe that would make anyone’s heart melt if they weren’t so damn loud. Okay in no particular order here are some of the species this old codger saw at the Belize Zoo that day that now seems so long ago and so far away.

First off is the Baird’s Tapir which is checking Alison out or vice versa. This is the largest of the Latin American tapir species which surprised me because I always that they were bigger than this. There were quite a few of them here living out their lives free from fear of jaguars even though one of them is only a few exhibits away.

While the tapir was sucking up to Alison this clay-coloured thrush was busy scavenging in its bowl.

The Belize Zoo has many humorous signs like the one below wherein a Guanacaste tree is bemoaning its fate at the hands of Hurricane Richard which struck Belize in 2010.

The compounds the animals are kept in are quite large and the walk between them resembles more a stroll in the rainforest rather than what you would see at most zoos.

Monkeys are always a big attraction at any zoo and Belize Zoo is no different. The spider monkeys seem at least as interested in the people as the people are in them.

This particular one put on a gymnastics display that would make Nadia Comenici jealous; then again Nadia doesn’t have a tail to go with two arms and two legs. He would put on his show for about thirty seconds and then stop and look right at you to see if you were impressed or not. Even though it is verboten to feed the animals, I suspect people do and that’s what was behind this type of behaviour. Or maybe he was just a natural born entertainer like my grandson Charlie.

The only creature I saw at the Belize Zoo I felt sorry for was this King Vulture. Despite being reviled by many as being ugly and depraved in their eating habits, vultures play a vital roll in the environment and I don’t think this guy is in any way ugly. He was a beautiful bird that for one reason or another would never again soar thousands of feet in the air on the warm thermals rising over the rainforest. And somehow, I think he knew it.

Not all the animals at the Belize Zoo are there because they have to be. The place was alive with agoutis who were in seventh heaven stealing food from the tapirs and monkeys.

Likewise this bird, which despite its black and white appearance I believe to be a brown crow.

Aside from the monkeys, the big stars of the Belize Zoo are the many species of cat found in the country. This is the smallest, a margay which is the most arboreal of the wild felines, spending almost its entire life in the tree tops.

Next in size is the much better known ocelot which can even be found in southwest United States. It is one of the few wild felines which is not currently endangered.

The jaguarundi is one of the few species of feline that is not particularly attractive, its head seemingly too small in proportion to its body size. This gives it more the appearance of being a large member of the weasel family. It’s a very efficient hunter and elusive enough that it is also not particularly endangered.

There was also a jaguar, but it was sleeping in a position that didn’t allow me to get a good photo.

Victor had suggested we pre-order our lunches before seeing the animals and this proved to be wise as by noon time the tiny restaurant on site was thronged with the school children and their teachers. However, our lunch and beer was there for picking up with no wait.

The drive from Belize Zoo to Belize City was uneventful and the city itself was not particularly attractive or memorable. I did recall that no building here was taller than the Sky Palace at Caracol I had climbed the day before. By mid-afternoon we were ensconced at the Radisson Fort George on the Belize City waterfront. Most in the group opted to spend the rest of the afternoon relaxing around the pool bar which was very tempting, but Alison and I opted to go for a walk along the waterfront. Despite the city’s negative image crime wise, we encountered no difficulties and watched a couple of dive boats being filled with what seemed an inordinate amount of supplies before heading out for a week long trip to the Belize reef. Sherrie and Barry Amundsen, two California forest fire fighters in our group, were set to join one of these type of trips the next morning.

As is usual with the last day of a wonderful trip, there was an air of false gaiety that overlay a feeling of solemnity at having to say goodbye to travel companions who had become good friends over the last month. With Victor, it was more like saying au revoir, because we fully expected to be travelling with him again, not knowing that the pandemic was already on its way and as I write this, having no clue if and when that will ever happen.

I hope you have enjoyed these posts on Central America as much as I enjoyed writing them. Although the Adventures Abroad tour is over Alison and I will be travelling to San Pedro on Ambergris Caye for a few days and you are welcome to join us.

This post is dedicated to Don Celle who Victor informed me not long ago, passed away recently. He and his wife Donna had travelled with Adventures Abroad many times and often with Victor. Although Don was a bit infirm on this last trip, he did not let that stop him from keeping up with the rest of us, including taking in the grueling drive to Caracol and back. The photo captures Don’s grim determination as he made the crossing from Costa Rica into Nicaragua. Donna please accept our heartfelt sympathy and may we cross paths again.