We are in the middle of winter and a pandemic at the same time. What the heck can a person do to get some enjoyment out of life during these difficult times? Here’s one suggestion for both avid birders and people who have only a passing interest in birds, but are fascinated by the size and majesty of bald eagles. Wait for a sunny and reasonably warm week day and head for the tiny community of Sheffield Mills in Nova Scotia’s Annapolis Valley and participate in the Eagle Watch. This is what Alison and I did yesterday, March 7, 2021 and it was a great outing combining birding, history, great views from The Lookoff and a stroll through downtown Wolfville.

The Sheffield Mills Eagle Watch came about as a result of the abundance of large chicken farms in the Annapolis Valley. I’m not talking about free range chicken farms, but rather industrial sizes complexes that raise the birds that are a significant part of most North American diets. When you raise chickens by the thousands, many don’t make it, particularly as chicks. This is a part of the unpleasant side of industrial farming that most people don’t know or don’t want to know about when they pick up a bucket of KFC or roast a chicken for Sunday dinner. At one time these dead chickens were simply discarded as biological detritus, but then about forty years ago the farmers started noticing something. The chicken carcasses were attracting not just the usual scavengers like crows, but also bald eagles in increasingly large numbers as the species recovered from endangered status due to the rampant use of DDT in the post WWII era. The eagles in turn were attracting the attention of birders who were not used to seeing bald eagles in such large numbers. Thirty years ago the community of Sheffield Mills decided to collect the dead chickens and provide a centralized spot for feeding the eagles from January through March.

This was the birth of the Sheffield Mills Eagle Watch and prior to the pandemic it was so well known that it drew birders from across North America and even Europe. That turned out to be an unexpected boon for Nova Scotia tourism at a time of year when the province received few visitors. Hopefully, once the pandemic is under control that situation will return, but for now it provides an opportunity for Nova Scotians to view the eagles without great numbers of fellow enthusiasts.

The eagles are fed twice daily, at 8:30 and 10:30 at 1770 Middle Dyke Road in Sheffield Mills which is a large open field surrounded by trees in which the eagles await the arrival of the dead chickens. This is the number of birders there yesterday. The young fellow is the son of the man in charge of doling out the chickens and he was quite interested in knowing where the attendees hailed from. There is also a donation box which I encourage anyone who comes here to patronize.

Here is a galley of eagle photos I took yesterday. Click on each image and then click again to enlarge them. 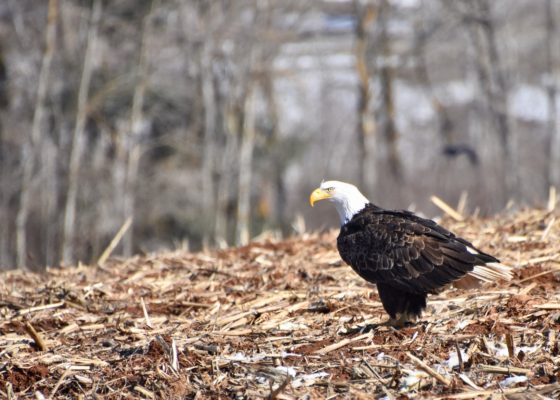 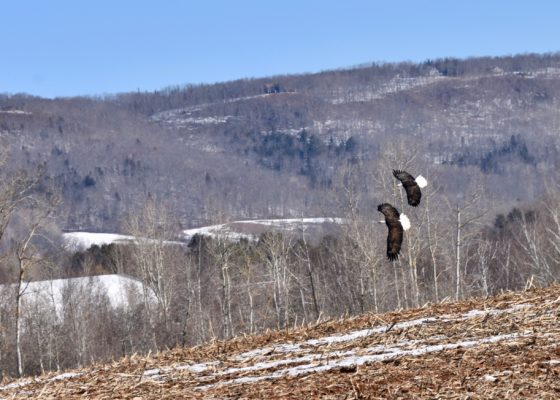 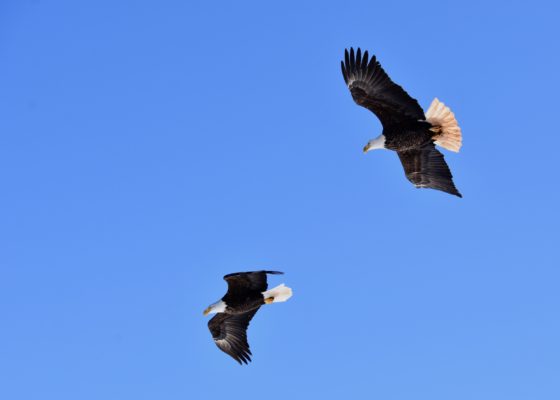 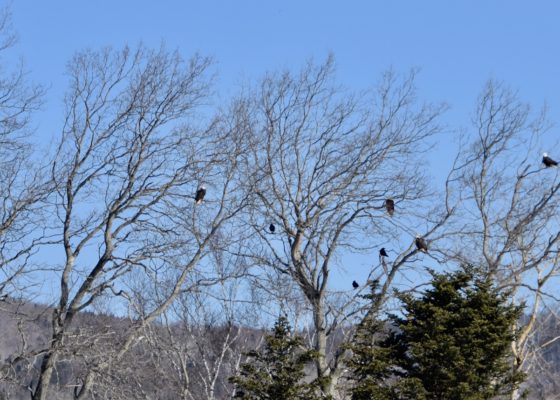 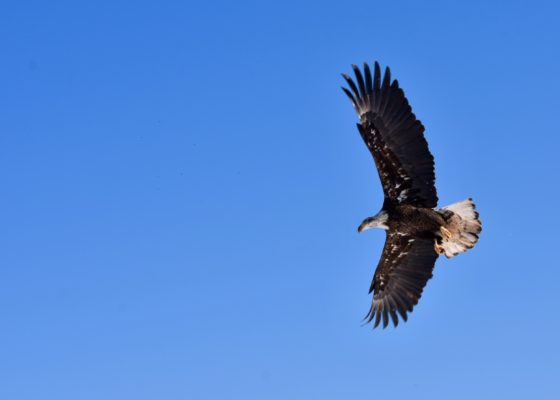 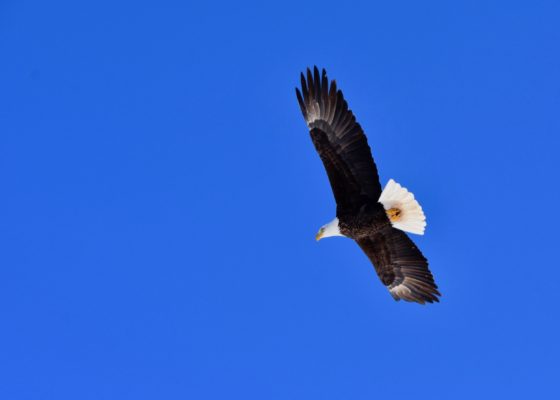 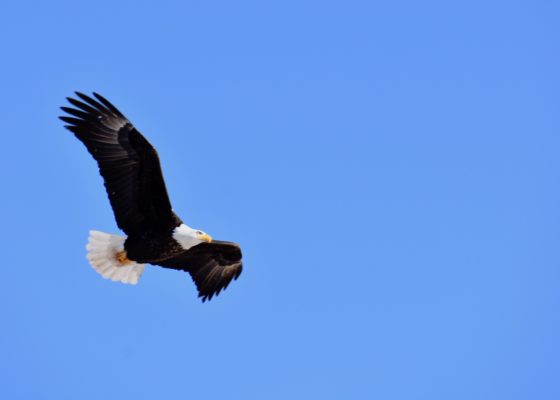 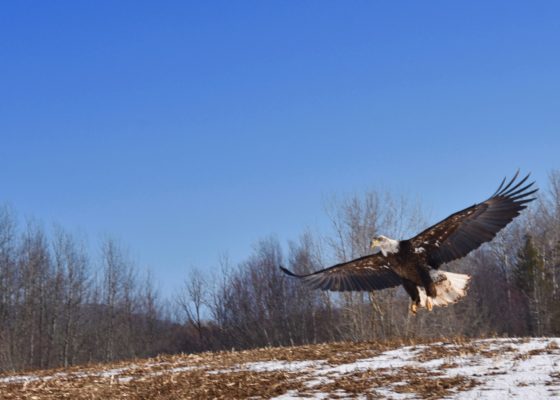 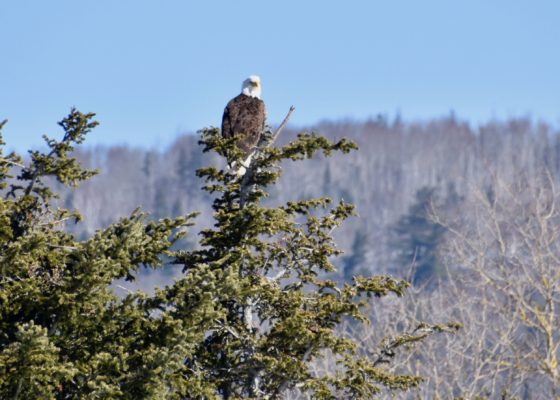 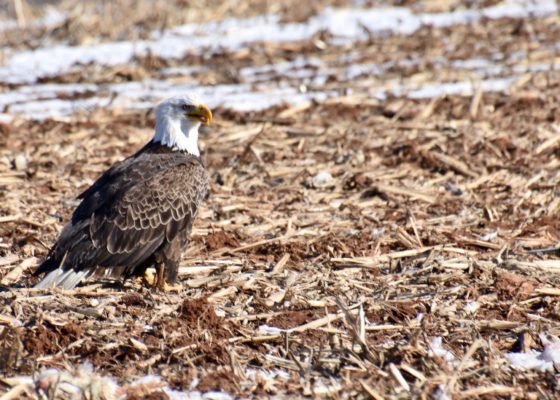 Yesterday would have been considered an average day with about twenty eagles all told, which is quite a sight to see, but at times there can be over eighty. Here is a short video Alison shot with my new iPhone 12 which gives a bit of an idea of what you will see.

On the way to Sheffield Mills you will pass a monument to one of Nova Scotia’s most important figures, Abraham Gesner. While trained as a doctor, Gesner’s real interest was geology and it lead him to take a great interest in the coal deposits of the Maritimes and the distillates that could be made from them. Pretty boring stuff, except it literally caused him to save the whales from extinction. Prior to his invention of kerosene, the primary source of oil for lamps was from whales which is why they were hunted relentlessly to the point of near extermination. Once the world had kerosene, the demand for whale oil almost vanished over night.

In 2019 this excellent monument was unveiled to Gesner near his birthplace in the community of Cornwallis (now Chipman’s Corner, the name change coming well before Cornwallis became a pariah). Note the tale of the whale in recognition of the role he played in their survival.

I have a special affinity for Abraham Gesner as my father was a geologist who studied much of the same rock formations as Gesner during the start of his career with the Canadian Geological Survey. As well, Gesner is buried not more than 100 feet away from our family plot in Camp Hill Cemetery and whenever I visit it, I say hello to Abraham as well.

If it is a nice day, I also suggest a visit to The Lookoff after viewing the eagles at Sheffield Mills. It is one of the best views in the province no matter what time of year.

So there’s still time to visit Sheffield Mills this winter. You won’t regret it.