This is my second post from a recent six day sojourn to the country of Malta with Adventures Abroad led by veteran guide and friend Victor Romagnoli. In the first post I explained why Alison and I chose Malta as our first international destination since full vaccination allowed travel outside Canada for the first time in almost two years. I also tried to convey what it was like travelling abroad while complying with all of the Covid restrictions imposed by the jurisdictions we had to satisfy which were Canada, Germany and Malta and also Air Canada, Lufthansa and Hilton Hotels. In this post I’m going to focus on what the Adventures Abroad traveller can expect from the Maltese food and drink you’ll experience on this trip. For me this is always one of the most important aspects of visiting a new country, so please join us as we wine and dine our way through Malta.

The title of this post is a bit of a misnomer as I would have been more surprised if the Maltese food was crappy. Malta sits at the crossroads of the Mediterranean which features some of the great cuisines of the world. My all time favourite place to eat is Sicily which is the closest point of land to Malta and a major influence on what they eat here. Another influence comes from the Arabic/Turkish sphere with its heavy reliance on fresh fruit, vegetables, nuts, dairy and lamb products. Add to that the fact that Malta has a sizeable inshore fishing fleet and you have the ingredients for a very healthy, tasty and balanced diet. As the Adventures Abroad description of the Malta trip correctly states, thank God the gifts bestowed on Malta during the British occupation does not include their cooking.

As noted in the first post, our entire stay on Malta was at the Hotel Valentina in the Paceville district of Malta just outside Valletta. All of our breakfasts were taken at the hotel and consisted of a nice buffet in which you did not actually pick up your own choices, but rather pointed to them where servers behind plexiglass put them on a plate. Our evening meals were all within easy walking distance of the hotel. The Paceville and the nearby St. Julien district comprise the primary restaurant scene in Malta and you can find almost any type of food you want from sushi to tex/mex and everything in between, including even the dreaded English breakfast. Our lunches were at various places we visited around the islands of Malta and Gozo and while Victor chose the evening restaurants you can eat where you like for lunch as that is on your own dime. Prices for lunch were very reasonable everywhere we ate.

Our first meal was at the hotel’s affiliate restaurant right around the corner, The Avenue, which I would categorize as the only traditional western style restaurant we ate at in Malta. It has a huge menu featuring grilled meats, pasta, pizza, fish and vegetarian dishes. This is where Alison and I learned that Maltese food comes in huge quantities such as this rack of ribs that would have been enough for both of us. It was excellent.

Alison had the beef tagliata which is an Italian specialty not often seen in North America. It is thin strips of usually flank steak served very rare over arugula with slices of parmesan cheese. Also excellent.

I hate to admit it, but we had so much left over we took it back to the fridge in the room with the hopes of finishing it at some later date. That never happened.

The Avenue is where we had our first taste of Maltese wine, a nice red from Marsovin winery which has been producing Maltese wines to go with Maltese food for over a hundred years. From this point on, we never drank anything but Maltese wines for the rest of the trip and never had one we didn’t like.

While the breakfast is included every day, I urge the reader to try some of the traditional Maltese pastries that are on sale in several places close to the Hotel Valentina. This one is just across from the entrance to Portomasso Marina not more than three minutes away. Everything looks delicious and prices are ridiculously cheap.

One Maltese food specialty you have to try is the Qassatat which is a flaky pastry in the shape of a turban which can have a great variety of cheese and vegetables fillings.

This is a spinach, ricotta cheese and onion variety. Pretend you didn’t see the sausage roll.

Our first lunch was in the city of Valletta which has a number of pedestrian streets with tourist oriented restaurants aimed at the cruise ship trade which right now is obviously not very active although there was one huge ship in port on one day we were on Malta. Usually these are places to be avoided, but not knowing any better alternatives Alison and I settled on Galea’s Kitchen which doubles as a hair salon. Looking at their website you’d think it was some kind of intimate bistro when it’s really a raucous street cafe. That being said, the food was quite good, especially this pasta with octopus.

Alison had the first of several Maltese salads which is a Maltese food specialty that seems to differ greatly from place to place. This was Galea’s version.

It was good, but not nearly as good as the version served at Eddie’s Cafe Regina also in Valletta which we tried a few days later. There doesn’t appear to be any consensus on what should go into a Maltese salad based on these two versions.

At Galea’s I had my first of more than a few of Malta’s signature beer – Cisk, which has been brewed since 1929. This photo was taken at Marsaxlokk a few days later. While refreshing, I would not call it one of the great national beers, but it’s 100% better than those monstrosities masquerading as beer, Coors Light and Bud Lite.

The second night Victor took us to a restaurant that served traditional Maltese food, Gozitan which specialized even further in the cuisine of Malta, featuring dishes from the smaller sister island of Gozo. The national dish of Malta is rabbit which is served many different ways. Rabbit stew is the predominant method which I had and enjoyed very much, although the bones can be problematic.

Alison ordered pasta with rabbit which was extraordinary, but the serving was gargantuan and was listed as an appetizer! You could have fed a family of four with this one dish. We did learn from our experience the night before and tonight to limit your choice to one appetizer or one main, but not both. Even though Adventures Abroad was paying, I hate to see food go to waste.

Despite having a red meat we ordered a bottle of white Fenici White a blend of chardonnay, vermentino and viognier from Meridiana Vineyards which was simply luscious on the palate and I really liked the ancient galley on the label.

Being this close to Italy you’ve got to think that pizza is very popular and available just about everywhere, but is it any good? We had it twice in Malta and the answer is a resounding yes. This is the capriciosa pizza from Eddie’s Cafe Regina in Valletta and it was properly thin crusted and not overly cheesy. Capicola or capocollo as it is often called, is my favourite of the Italian cured meats and I jumped at the chance to have it on a pizza.

As good as the pizza was at Eddie’s, it was even better on the island of Gozo where we had this pizza described simply as being Gozitan. It had a wonderful blend of cured ham, onions, olives and capers, again on a very thin crust and perfectly baked. My mouth waters just thinking about it. So if you are a pizza lover, and who isn’t, then Malta will not disappoint.

In our travels around Malta we saw a lot of prickly pear cactii, which are pretty well an invasive species on the islands. In Mexico they use the leaves or paddles to make nopales which are very good when grilled in olive oil and are a very popular street food. In Malta they eat the ripe fruit of the cactus which, when I tasted one, was truly a pleasant surprise. On the day we went to Dingli, which I’ll describe in a later post, there was a vendor selling these prickly pear fruits and Maltese coffee which features a pinch of chicory added to the grounds. For a less than a few euros I got two new taste sensations in one stop.

I’ve saved the best for last and in fact it was our last dinner on Malta. The restaurant was Gululu and it features traditional Maltese food.

Despite going downstairs to enter you end up on the St. Julian’s Bay waterfront with great views and a fresh sea breeze. The Maltese food tasting menu costs 25 € and is a bargain in my opinion. It starts off with a Maltese version of bruschetta which adds mint to the traditional ingredients. Very good, but only a warm up.

Next were cauliflower, potato, black olive and pecorino cheese fritters that were so tempting I forgot to take a photo of them.

This was followed by perfectly seared rare tuna with green herbs and a caper, anchovy and garlic dressing.

The piece de resistance was next and was the best of all the Maltese food we had on this trip. It was a dish that you might only get in Malta – pressed rabbit belly with a red wine reduction. Remember I wrote that my only complaint about the rabbit stew were the bones? Well that problem is solved with this dish which I can only describe as essence of rabbit. If you ever want to try rabbit, but were perhaps a bit reluctant, then this is the place to overcome your hesitation.

Our final wine to accompany this great feast of Maltese food was very appropriate – a chardonnay/chenin blanc blend from Marsovin Winery labelled Ulysses who we will learn in an upcoming post was a guest on the island of Gozo for seven years.

In conclusion, your Adventures Abroad trip to Malta will be far more than a just sightseeing excursion, but an immersion in Maltese food and drink if you want it to be and you should.

In the first post I promised something on Maltese cats as well as Maltese food and here is a small gallery of Maltese cats. Click on the image to create a new window where you can expand them if you wish. 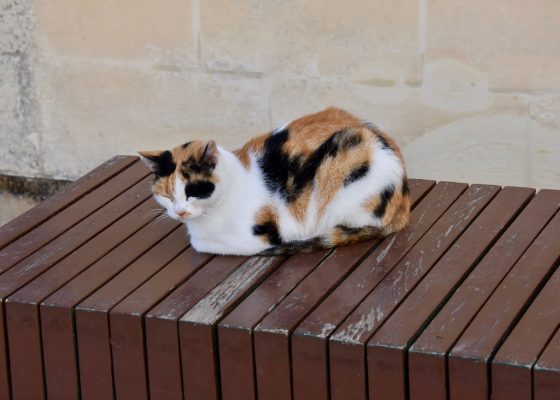 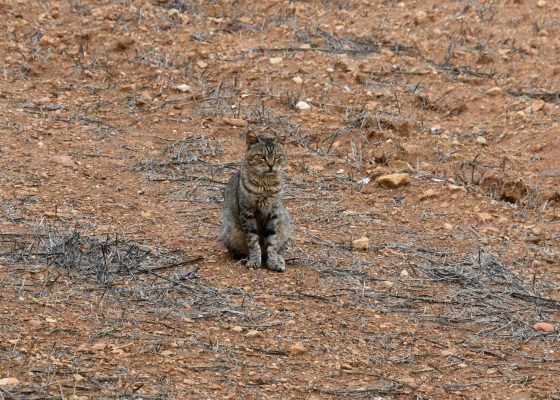 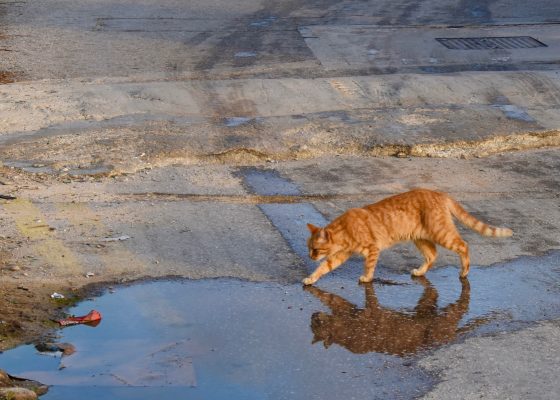 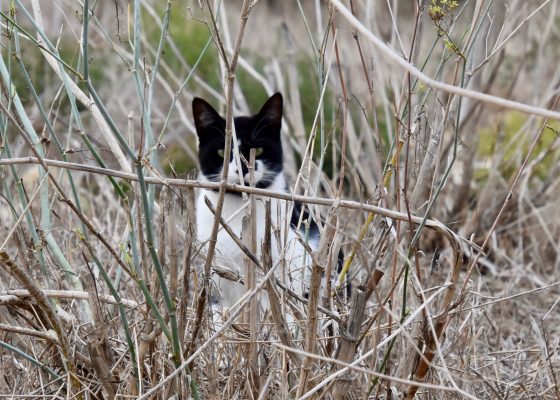 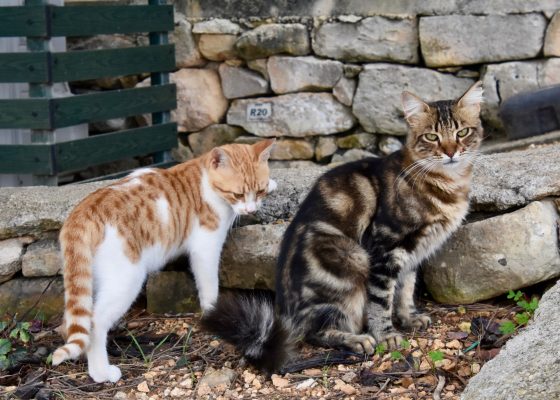 In my experience many countries lean towards cats or dogs as their favourite pets and Malta is definitely a ‘cat’ country. Although there is a breed of dog called a Maltese it has no connection to Malta and I never saw anything remotely like one on the islands. There is also something called a Maltese cat which means its fur is a grayish blue colour. Weirdly, I don’t think I saw one of these either.  The bottom line is that if you like cats then you’ll like what you see on Malta.

In the next post we’ll meet our local guide and driver and take a boat trip around Grand Harbour. Hope you’ll come aboard.