In the last post from this Adventures Abroad walking and hiking tour of Switzerland we took the train to St. Moritz and enjoyed a walk around this fabled resort town. We later paid a visit to the famous Heidi Hut and walked back down into St. Moritz from it. In this post we’ll undertake our first serious hike as we walk from the top of the Muottas Muragl funicular to the Alp Langard restaurant for lunch and then take a chairlift down to Pontresina. Please join us for some alpine fun in the Engadin Valley.

In the last post I described how winter tourism was virtually invented in St. Moritz in the mid 1800’s by Johannes Badrutt, owner of the luxurious Kulm Hotel. However, there would have been no winter tourism possible without the fantastic setting of St. Moritz within the Engadin Valley. The alps rise up in seemingly all directions around the town, first in forests, then alpine meadows and finally barren rock leading to a land of perpetual snow and glaciers. Today there are a multitude of ways to access the 88 pistes or trails as we call them in North America. For cross-country skiers and winter hikers there are over 230 kms. (143 miles) of trails in the Engadin Valley.

However, we are here in early June and the skiers are long gone. This is the start of the hiking season and I for one can’t wait to get started. Hiking in the Swiss alps from legendary places like St. Moritz and Zermatt has long been on my bucket list and I suspect many others in our group. There is definitely a palpable sense of excitement at the breakfast table in the Hauser Hotel.

Our local guide Susie arrives and leads us to a bus stop near the hotel that takes us to the starting point for today’s adventure, the Muottas Muragl funicular rail station, which is not exactly crowded. Built between 1905 and 1907 it is a steeply ascending funicular railway that runs 700 metres (2,000 feet) up to the Muottos Muragl which features a hotel and is the starting point for today’s hike.

I wasn’t able to get a great seat on the funicular so I don’t have any photos of the journey up. However, I took this one looking back down at the track once we got out of the station. Note the solar panels alongside the tracks. The Engadin Valley gets over 300 days of sunshine a year, but alas today or at least this morning is not one of them. We are now at over 8,000 feet (2438 metres) elevation and we need to dress warmly, which everybody in our group seems to have done.

Susie takes us over to this large map with the Muottas Muragl upper station on the left and our destination Alp Languard on the right. There are several ways to get there and after some discussion Susie opts for the Panorama route which is lowest of the trails that lead to Alp Languard on this map. It is about 6.3 kms. (just under 4 miles) and should take about two hours to traverse. It is rated as moderate and while I’m not worried about that, I do have some concerns as to how our group will respond to hiking at this altitude. Most people are OK up to 8,000 feet, but altitude sickness can set in above that for some. Also, the thin air will no doubt have an effect. Only one way to find out …

Here is the view looking down from our starting point. Not the clearest of mornings, but it is still breathtaking.

There is a nice looking restaurant up here, the Alp Muottas, but it’s way too early for lunch and it doesn’t look open yet. I remember from a ski trip in the Italian alps many years ago that you can find these type of restaurants in Europe that you can only get to by chairlift or other device, but not by road. Some have been here for over a hundred years welcoming skiers in winter and hikers in the summer.

There is one more chore to undertake for most of us before starting out and that is to get our picture taken at the Alp Muottas heart which is just below the restaurant.

Ok, we are now ready to start hiking in earnest. Susie leads the way on a wide path that is easy walking on a gentle down grade to the stream that you can see in the distance.

We are well above the tree line at this point, but that does not mean that there is no flora worth observing. In fact, almost from the first step on this hike Alison and I start to notice the alpine flowers. They do not carpet a meadow like the ones outside the Heidi Hut, but instead are found in single plants or small groupings. The more you look the more you see and it’s hard to keep up with the rest of the party what with trying to get pictures of some of these beauties.

This is yellow gentian. I will include a small gallery of some of the flowers seen on this hike at the end of this post, but trust me, if you like flowers then taking this AA trip at this time of year in early June will reward you immensely.

After our steady down hill we reach the stream and cross it on this wooden bridge. From here we turn right which is the start of the Panorama trail.

If we had gone left instead of right we would have eventually arrived at the Languard chairlift, but on a longer and more difficult route. However, the highlight of the longer route is the Segantini Hut where the great Swiss painter Giovanni Segantini lived and painted until his unexpected death there at age 41. I featured this Segantini painting in a previous post on the Kunstmuseum in Basel and would love to have seen more of his works. Stupidly, I was unaware that there is a Segantini museum in St. Moritz until I began research for this post. Oh well, an excuse to return to St. Moritz as if anyone would need one.

This is the view standing on the bridge.

This is a view back to the Muottas funicular station giving an idea of the descent to the stream crossing.

We would now begin a gradual ascent up the Panorama trail which was considerably rougher in parts than what we had experienced so far. This was due to a jumble of scree that covered the path with large rocks that were wet and required some care to navigate, but everyone made it without any real difficulty. This section of about half a kilometre was the only portion of the hike that I would consider in any way challenging. With proper footwear and hiking poles it should present no great obstacle. Once clear of this portion of the trail we now began to descend again, eventually reaching the tree line.

One of the reasons I enjoy travelling with Victor Romagnoli, our AA guide on this trip, is that he is a birder as am I. While on my home territory I can identify most birds I might see, not so in my travels to foreign lands, at least not on my first visit. Victor identified these two as European crossbills and they have clear similarities to our two North American varieties.

A little later on we encountered this solitary sitter,  a spotted nutcracker which was a life lister for me.

So far on this Engadin Valley hike we have encountered both interesting flora and fauna and now we get to some serious panoramic views of St. Moritz and its lake which somewhat incongruously has a couple of sailboats on it. Sailing in the alps. Who knew?

From the viewer’s perspective you would think that this is an aerial shot of one of the hanging valleys that make up the Engadin area, but it is taken from the Panorama trail.

This is a a shot of some of our group which has now become quite spread out.

I have surged somewhat ahead of the rest of the group. Susie advised me that the area we were now entering was the most likely spot to see an ibex and if there were any around I didn’t want miss them. We were still continuing our descent and this small stream marked the lowest point. After this it was pretty well all uphill to the Languard chairlift. This photo also shows that there were places where the trail was fairly narrow with some steep drops off the side. Anyone with acrophobia might feel uncomfortable in this situation, but nobody in our group that I am aware of was bothered by it.

This is another shot of our group with Susie leading and Victor acting as sweeper at the rear.

Well my intention to be the first to spot an ibex turned out to be well founded as I rounded a corner, saw some movement and spotted this female ibex about 75 yards above the trail. This photo is taken at 400mm. so the ibex looks a lot closer than it actually was. She lingered long enough for Susie and a few others to see it, but as I expected once she noticed a lot of people she retreated into the forest. This was the only ibex spotting on the entire trip, but one is better than none.

Regrouped after the ibex spotting, we now came to this culvert tunnel which covered a ninety degree turn in the trail.

From here we gradually ascended above the tree line and could see the Languard chairlift off in the distance. The final kilometre or so was through an alpine meadow and was easy hiking to our luncheon destination the Alp Languard restaurant. It has an absolutely stunning location overlooking the Engadin Valley.

This is the view from the restaurant deck. As you can see it is starting to get a bit sunny.

This pair of boots doubling as a planter welcomed hungry and just a bit weary hikers.

This was a charcuterie platter that Alison and I shared for lunch. It was as good as it looks.

After a decent interval to relax from the hike we got onto the chairlift down to Pontresina and had more great views of the Engadin Valley on the way down.

You will find next to no selfies from the many thousands of photos on this website and this one explains why.

Well that concludes the Engadin Valley hike, but not this post. Here is the gallery of just some of the wildflowers we saw on this fine day. 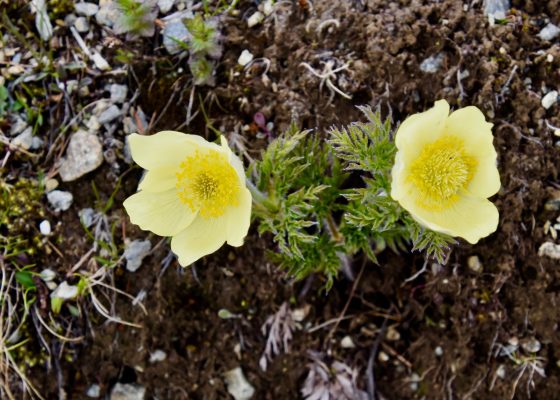 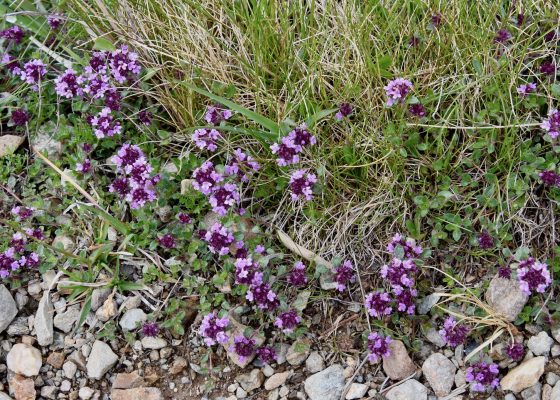 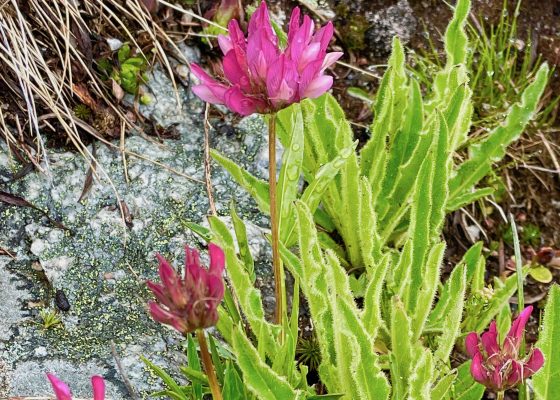 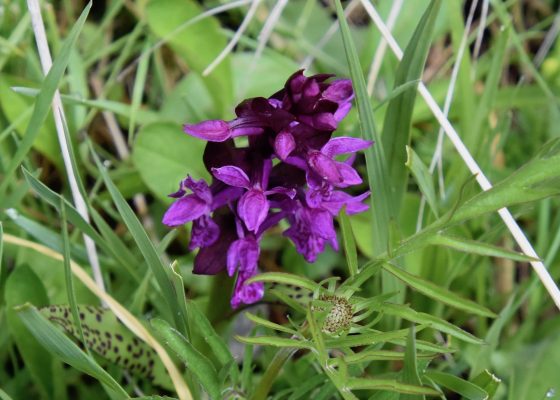 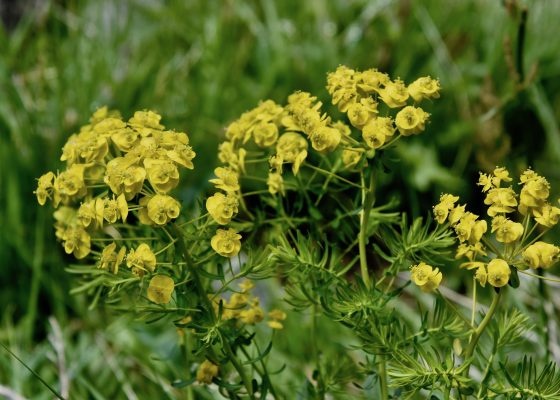 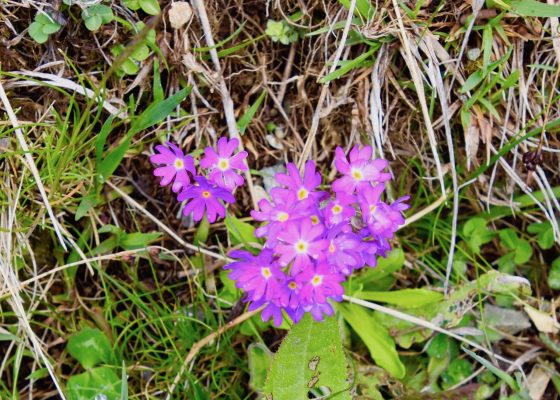 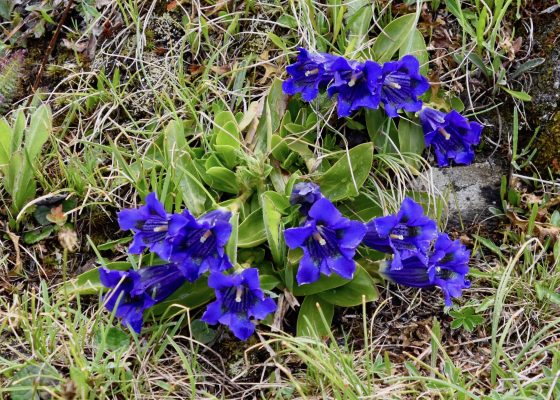 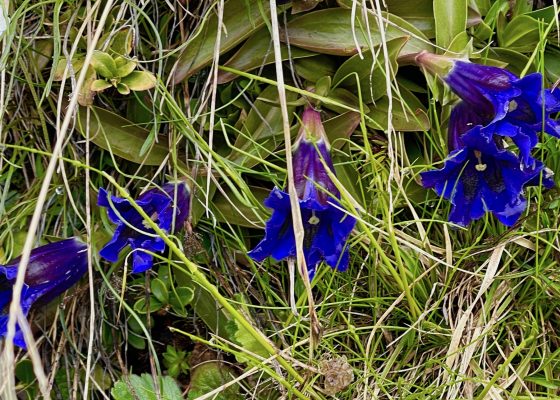 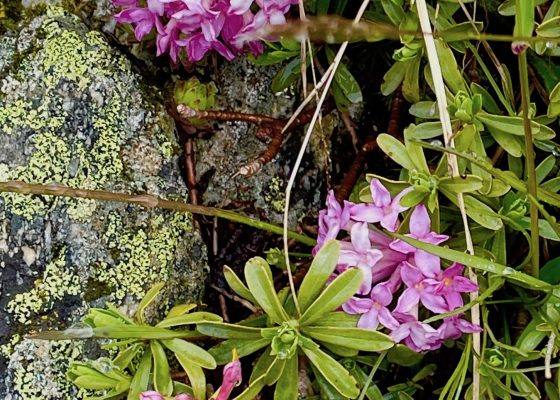 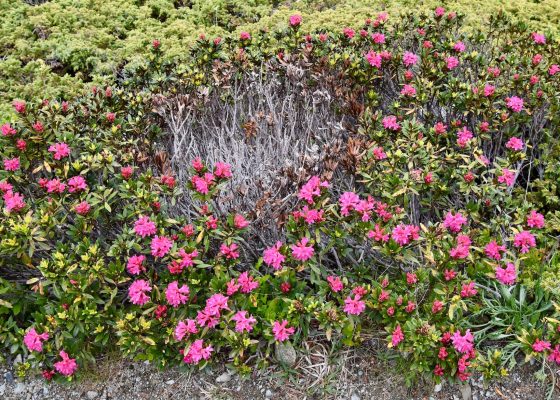 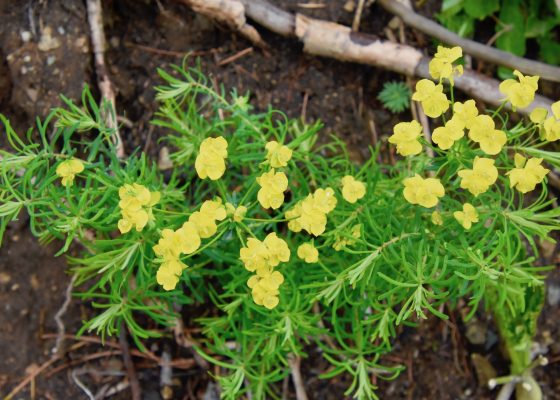 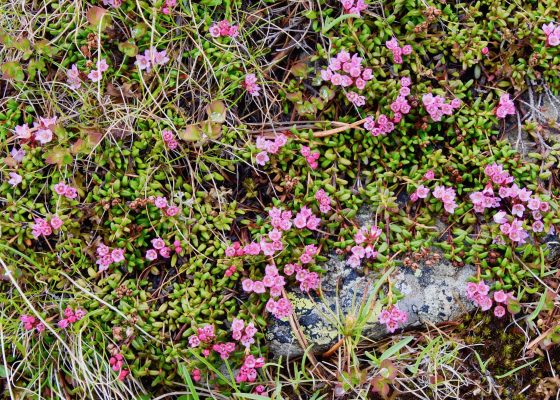 In the next post we’ll take one of the most famous rail journeys on the planet as we go from St. Moritz to Zermatt on the Glacier Express. You won’t want to miss that.