Home › Destinations › The Walls of Dubrovnik – Why You must Walk Them

The Walls of Dubrovnik – Why You must Walk Them

In the last post I explained how and why we came to be in Dubrovnik in the late fall of 2015. In this one I am going to describe one of those experiences I have been waiting a lifetime to do – walking the walls of Dubrovnik. Because we are staying in an apartment right in the heart of the Dubrovnik it is possible to get up and start exploring the city before the hordes of day trippers arrive and that’s exactly what I do. Here are the bells of St. Blaise which we can see from our apartment, in early morning.

And here is the front of St. Blaise church before the souvenir peddler’s set up for the day.

This is the main street, the Stradun, virtually deserted. In a few hours it will be choked with tourists and the people who cater to them.

This is the famous clock tower, which you can see at the end of the Stradun. It’s duly famous because of the two green men, Maro and Baro who have been striking the hours for hundreds of years. More on them later. I shot this in black and white because the grey skies provided little contrast for a colour shot.

Next we come to the statue of Orlando which dates all the way back to 1418 and has been the site of public proclamations and punishments since that time. He is the unofficial guardian of the city and up until recently, when the Serbs and Montenegrins attacked, he was doing his job pretty well. Despite being surrounded almost completely by the Ottoman empire, the walls of Dubrovnik, St. Blaise and Orlando all seem to have combined to keep the city independent and unconquered. Well done guys!

Lastly we come to the Fountain of Onofrio which stands just inside the Pile Gate, the principal entrance to Dubrovnik. It was built as the terminus of an aqueduct system that still supplies the city with water today. Onofrio was the first name of one of the designers Onofrio della Cava, way back in 1438. Imagine if we could expect modern city infrastructures to last over 500 years.

OK, that’s enough early morning exploring, time to pick up some pastries from the shops that are just opening on the Stradun and go back and pick up Alison. She’s dutifully waiting back at the apartment, anxious herself to start walking the walls of Dubrovnik. 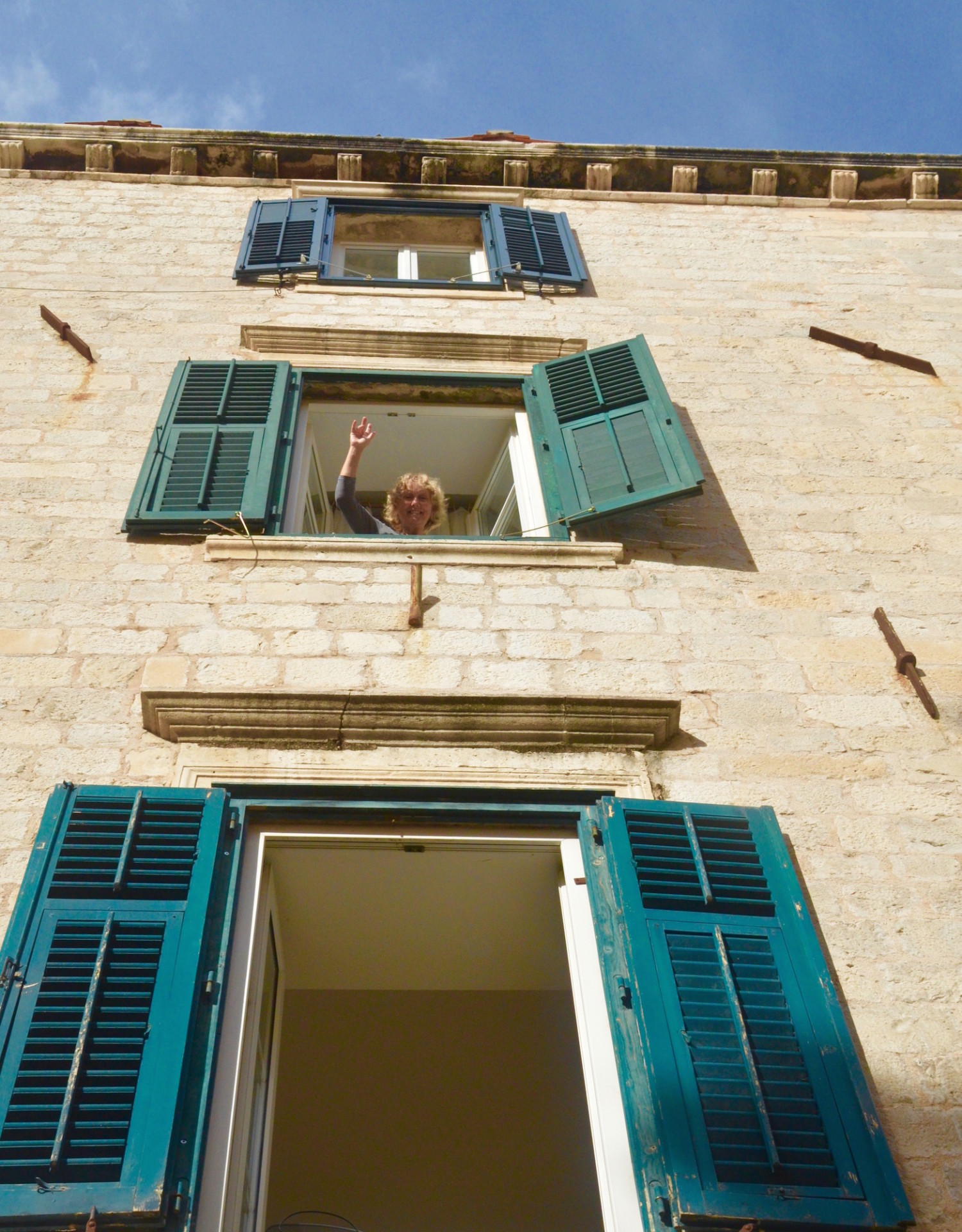 Alison in the Secret Apartment

Walking the Walls of Dubrovnik

The walls of Dubrovnik are usually considered the best preserved of any city walls in Europe, if not the world. They form an unbroken link of 1940 metres (over one and a quarter miles) around the city. Their distinct white colour is responsible for the city’s moniker, The Pearl of the Adriatic, as from the water they apparently give the city a white opalescent gleam. The walls are interspersed with a series of forts and lookouts to explore as well as dozens of places to take great photos of the city below. Equally interesting is a chance to peek into the everyday life of Dubrovnik as it is carried on behind the doors that are shut to the ordinary tourist.

Unlike Rhodes and Avila, Spain which also have great walls I have explored, entry to the walls of Dubrovnik is strictly controlled and requires an entrance fee of 200 kunas which is over $32 USD or €26.50 – so it’s not cheap. The first entry is at 8:30 and we are first in line. You are only permitted to tour the walls in a counter-clockwise direction so it’s effectively a one-way wall.

Here is the view from the spot where you first come out on top of the walls of Dubrovnik – pretty nice, eh?

Early on you get a great view of St.Lawrence Fortress on even higher ground than the walls. We will be visiting there tomorrow on a Game of Thrones tour.

Here’s Alison with St. Lawrence Fortress and the small back harbour of Dubrovnik.

In some places you can walk out to a projecting part of the walls to get a good look at them from the side.

In others you can look down into people’s backyards where life goes on much as it has for over 800 years.

While in other places you can view unrepaired damage from the Serbian bombing campaign in the 1990’s.

There are a number of museums located within the walls and you can pay another 130 kunas to visit them and another seven museums within Dubrovnik. I bite, which few others on the walls do. While the small modern art museum is nothing special the Maritime Museum located within ancient Fort St. John, definitely is. It does a great job of explaining the maritime history of Dubrovnik, which essentially is the history of the city. It also has a tremendous collection of ship models and paintings. Regretfully they don’t allow photography, but this picture from the website gives an idea how spacious and airy the museum is. That’s also about how many people we saw as we toured the place. It makes for a nice break from simply marching around the walls non-stop.

Just past the museum you come to great views of the Dubrovnik harbour. Note the phoney galleon in port.

Then you come to some great views of the city again. Here is the view of St. Blaise church from the walls. The building just to the right of it is where the Secret Apartments that we are staying at are located.

This is the cathedral of Dubrovnik, along with clock tower and St. Blaise.

Nearing the end of the walk you can climb the Minceta Tower for this final view of the walls of Dubrovnik.

Just below the Minceta Tower is one of the more strange sites you will see on walking the walls of Dubrovnik. It’s a basketball court, but note the irregular shape to compensate for the fact the walls get in the way.

After coming down from the walls we walk back up the Stradun past the Franciscan monastery where they have pharmacy dating back to the early 14th century and this well-done if somewhat gruesome pieta over the side entrance.

At the other end of the Stradun is the Dominican monastery which has these grand steps that I noticed from the walls. They seem familiar, but I can’t place them.

Across from the staircase are these three figures carved in stone. There is nothing to say who they are or why they are here and I can find nothing about them from either the net or elsewhere. These are the type of little mysteries that make Dubrovnik so enchanting – you never know what will be around the next corner or on the next wall.

From this end of the city you can walk out to the waterfront via the Ploce gate and stroll along the outside of the walls as far as Fort St. John which is on the far side of this photo. There are tour boat operators offering trips to many of the nearby islands and seafood restaurants galore. The water is clear and quite clean considering it is a working fishing boat harbour. All in all it’s another aspect of Dubrovnik that adds to its Adriatic allure.

By now we are hungry and stop in at Pizzeria Storia which is just inside the walls. There’s no reason to pick this place over dozens of others, but so far in Croatia we haven’t found any places we’ve tried that have been disappointing and Pizzeria Storia does not disappoint either. That’s an absolutely delicious looking and tasting anchovy salad and a simple margarita pizza. Oh, and the beer’s as good as ever.

Well, that’s the story on walking the walls of Dubrovnik. Hope you’ll join us in seeing more of Dubrovnik in the next post.

Here is a link to the Croatia photo gallery with pics from every day of the trip from Split to Dubrovnik. Enjoy.