Monteverde Redux -The Second Time Around - The Maritime Explorer

Monteverde Redux -The Second Time Around

I first visited Monteverde Cloud Forest in Costa Rica in 2018 and was blown away by its beauty and birdlife which I described in this post. I have returned early in 2020 on the Central America trip led by Victor Romagnoli for Adventures Abroad the same Canadian company I traveled with on the first visit. At first I was simply going to do an update on the original post, but this visit included a number of new adventures as well as a repeat of the highlights of the first. Please join our Adventures Abroad group in exploring this magnificent area of Costa Rica.

We started the day in Manuel Antonio on the Pacific Coast where this toucan put in an appearance at breakfast, no doubt looking for the Froot Loops with which Kellogg’s has long associated the poor things.

Monteverde could not be more different than Manuel Antonio, the latter being a Pacific Coast paradise with great beaches while Monteverde is a cloud forest so far high up in the Central Cordillera that it is, more often than not, hidden in the mists. The first time we visited Monte Verde the road into the mountains was under construction and reduced to one gravel lane with drops of up to a thousand feet just inches away from the buses’ outer wheels. Getting there could take an entire day from the Pacific Coast. Today after we reach the turn off from the Pan American Highway things are completely different. The road has been completed and paved the entire way and getting to Santa Elena, the small tourist town where most of the services for Monteverde are found, is a breeze.

Somewhat paradoxically, the town itself is far quieter than it was on our first visit, with lots of backpackers still, but only a handful of tour groups such as ours. The reality is that Costa Rica, relative to other Central American destinations, has become quite expensive and that’s apparent in the reduced number of tourists, but I’m sure not complaining. Less really is more in terms of the number of people visiting a place like this.

Our accommodations are at the Ficus Lodge, the same place we stayed before and little has changed which is all good because it has very nice large rooms and plenty of good birding just on site including a gray-headed chachalaca outside the window.

Another place we returned to that was as good as I remembered was the Monteverde Butterfly Garden where Canadian Bryna Belisle once again put on her comedic stand up on the sex lives of insects that was as funny as any you’ll find in a comedy club and it was all new material from our first visit. What was not new and eagerly anticipated was the encounter with Timmy the giant cockroach, especially when Bryna pops him in her mouth and he slowly crawls back out.

After Bryna’s introduction we were given a guided tour of the various butterfly gardens, but not before I got to ride the giant rhinoceros beetle. Yeehaw!

There are a great variety of butterflies representing various environments from high in the canopy to the much darker forest floor. Here are just a few.

On the first visit we birded the Monteverde Cloud Forest Biological Preserve which was the first of a number of privately owned nature preserves that you can visit to experience a walk through a cloud forest, which as you would expect is a rain forest that is usually literally ‘within the clouds’. At Monteverde warm winds from the Caribbean blowing west hit the Central Cordillera and are cooled to the dew point as they rise up the mountainside creating an almost perpetual blanket of cloud over the upper levels of the forest and a type of habitat found only in a few places in the world.

This morning we are going to visit Curi-Canchi Reserve which is another private reserve in the Monteverde cloud forest. The reason we are visiting this reserve and not one of the others is because our guide, Adrian Mendez, with whom Victor has been working for over twenty-six years, has determined that today this is the most likely place to see the one bird that almost everyone is here to see – the resplendent quetzal.

I’m continually amazed at how the weather always seems to do the opposite of what it is supposed whenever I visit, like rain in Death Valley for instance. Yesterday it rained in almost always sunny Manuel Antonio and today of course it’s sunny as hell in the alleged cloud forest. However, for once that’s not such a bad thing as the birds will still be here and with the sun shining their colours will be more apparent. I’m not complaining so let’s go birding with Adrian and Victor.

The first difference I noticed between this reserve and the first we visited is that there are a fraction of the people here that there was at the other. Whether this is because of a decline in tourists or not, I can’t say, but in contrast to Manuel Antonio, our group is the largest in the reserve and it doesn’t feel overcrowded.

The symbol of the reserve is not the quetzal, but the tiny slate-throated redstart that you see on the sign and all over the place close to the ground, but they are so flitty that getting a good photo is not easy. God knows I tried.

Curi-Cancha has some tremendous old growth trees like this enormous fig that Adrian estimates to be well north of three hundred years old.

While I did say Curi-Cancha was not overcrowded, you could think differently once a quetzal bird has been sited. So what’s the big deal with quetzals? Lots. The resplendent quetzal is considered one of the most beautiful birds in the world and it is intrinsically linked to a number of pre-Columbian Meso-American cultures including the Mayans. It is the official symbol of Guatemala and appears on its flag. In the Archaeological Museum in Mexico City you can see one of the most famous pre-Columbian relics – a cape made entirely of quetzal tail feathers which were plucked from the birds that were then released to let them regrow.

Luckily for birders and I suppose the tail feather collectors of yore, quetzals are birds of habit and usually return to the same avocado trees to feed every day. Adrian knows where these trees are and sure enough, the quetzals are there. This draws  a crowd as virtually everyone in the area congregates under the tree looking upward.

And there he is. A beautiful male showing his bright red chest and long tail feathers. This picture was taken on a smart phone held up to the eyepiece of Adrian’s spotting scope which can actually work as well as a telephoto lens. Regardless of what else we see or don’t see the morning has been an unequivocal birding success with this sighting.

But there’s more. We see a quite rare highland tinamou and a pair of mottled owls and this also rare white-naped bushfinch.

However, I have to confess that as much as I enjoyed seeing the quetzal, I like the variety of hummingbirds even more. There is a clearing at Curi-Cancha with about a half dozen hummingbird feeders and its alive with the loud buzzing of these tiny creatures. If you even wonder why they are called hummingbirds come to a place like this and you’ll know in a minute. Adrian identifies at least five different species and while I’m not positive I’ve got these photos properly identified, I’m pretty confident in their identifications.

The largest of Costa Rica’s hummingbirds, the oxymoronic lesser violetear.

Caught in mid-flight is this magenta-throated woodstar, an absolutely beautiful little bird.

Finally, a rare shot of a sitting hummingbird, in this case a male white-throated mountain gem.

Birds and flowers were not the only things spotted in Monteverde today. There were agoutis in the undergrowth as well as this variegated squirrel who deigned to pose for me, the agoutis didn’t.

The Monteverde cloud forest and the butterfly garden are by no means the only attractions in the Monteverde area. On the first visit we went to the Selvatura Adventure Park and did the very worthwhile canopy walk via the suspension bridges high about the forest floor. You can read about that in my first post on Monteverde. This time Alison and I opted to spend the afternoon in Santa Elena visiting some attractions there. She chose the Monteverde Orchid Garden which is right in downtown Santa Helena and very much enjoyed the experience. This is a not for profit establishment that is now focusing on the very rare and only recently discovered, miniature orchids of Monteverde cloud forest. Here are a few of her pictures. Probably not what you expected to see at an orchid garden, but interesting nevertheless. 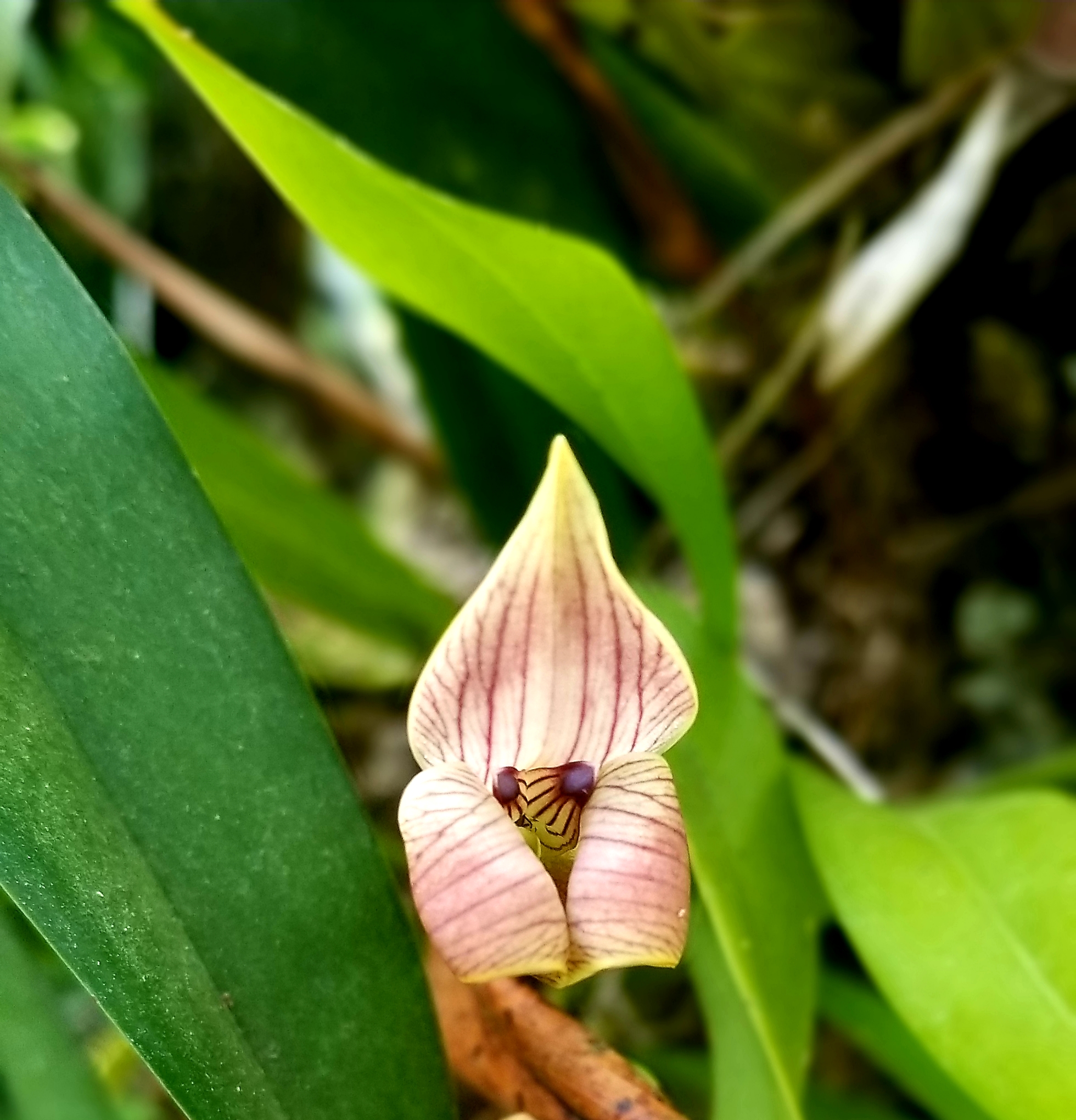 My choice for an afternoon visit was the Monteverde Herpetarium which is a fancy name for a reptile zoo, mostly snakes (now you know why Alison chose orchids). With some of most poisonous snakes on the planet including the biggest rattler I’ve ever see, an equally monstrous and deadly bushmaster and plenty of non-venous snakes that are so well disguised that you would never know they were there until …

Let’s just say, don’t go to the herpetarium before going into the cloud forest or else you might not go at all.

Tomorrow we are going to cross into Nicaragua or at least try to. Hope you’ll come along.