This post is a continuation of the Tahiti circle tour which I began in the first post on the Adventures Abroad French Polynesia trip that Alison and I took earlier in 2022. In that post we visited the Papeete market and the most complete marae or temple site in the entire territory. In this post we’ll visit an amazing waterfall, a botanical garden, the site where the H.M.S. Bounty first landed and enjoy a traditional Tahitian meal. I hope you’ll join us.

Our first stop on this part of the Tahiti circle is at the Vaipahi Water Gardens which double both as a botanical garden and a sacred site where the ancient Teva people believed the waters of the Vaimi River provided a path of purification for the soul after death. I’ll start with the flowers and then do my best to explain how the waters here came to be considered sacred.

This is a map of the gardens which has a fairly straightforward circular route with nineteen numbered locations. We spent about an hour at this very tranquil and appealing place.

Our guide Gerald Mingo led the tour and pointed out a number of exotic flowers that I’ve put into a gallery. Unfortunately there is one that I am unable to identify. 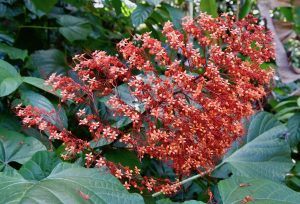 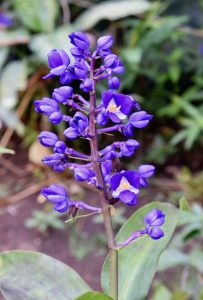 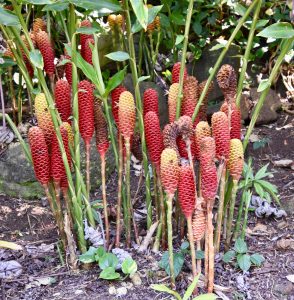 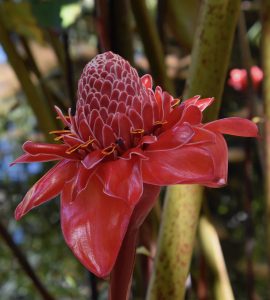 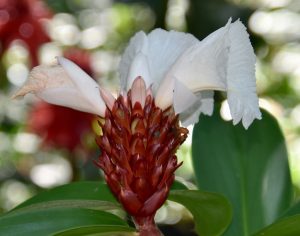 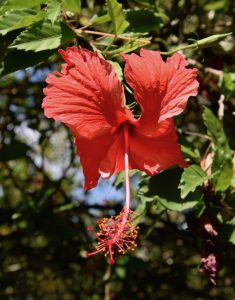 Aside from the flowers there are a number of interpretive panels in French, English and Tahitian explaining the ritual purification process that includes the soul of the deceased cleansing itself with the waters of the small waterfall that flows in these gardens, as depicted in #3 on this panel. 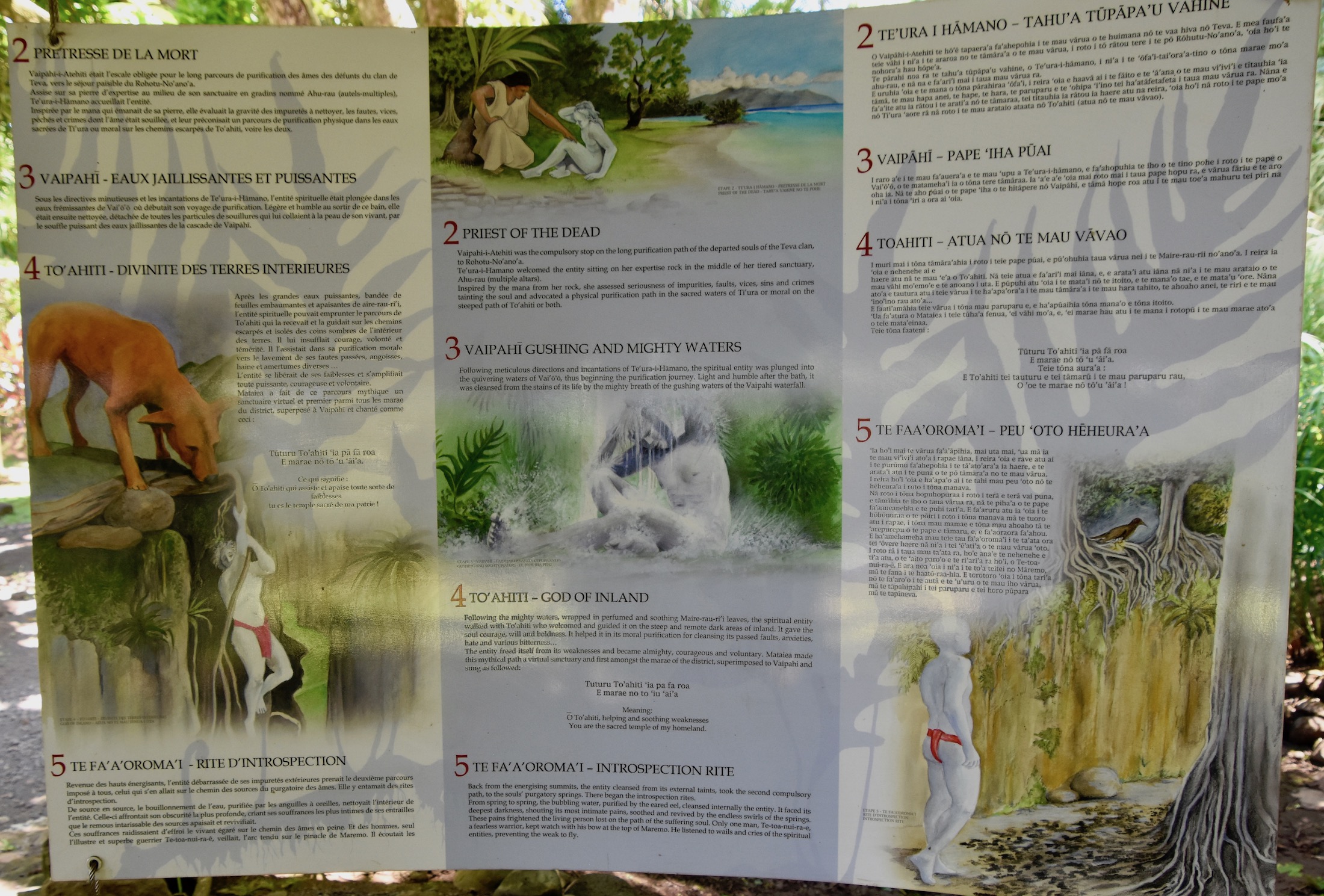 This is the actual waterfall and sacred pool. Like the marae we just visited, there is a palpable aura of mystery about this place, knowing that for thousands of years before Europeans arrived here, the Teva people believed this to be among the most sacrosanct spots in their world.

After crossing the small bridge which is #5 on the map, I slipped away from the group to get this photo of the series of contained pools below the waterfall. That’s our Adventures Abroad guide Martin Charlton and tour member Scott chatting on the bridge.

This is a view from lower down. As you can see this is a beautiful spot. There is just something about the sound of trickling water and the colour green that creates a sense of well-being and tranquility in one’s inner mind and I definitely felt it at Vaipahi.

The Tahiti circle tour was now about half way around the island and it was time for lunch.

This is the Paul Gauguin Museum Restaurant which has an idyllic location facing Tahiti Iti which is connected to Tahiti Nui, the large part of the island by only a narrow isthmus.

Somewhat ironically there is no Paul Gauguin museum here, it having closed a number of years before. But don’t worry, we’ll get to learn a lot more about Gauguin’s time in French Polynesia when we get to Hiva Oa in the Marquesas later on this trip.

The owner of the restaurant is an elderly British ex-pat who opened it many years ago and he is here to greet us in person with a very nice looking buffet that includes a poi station. There were selections of poi made from taro root, plantain and breadfruit. I mentioned in the last post that poi is an acquired taste, but I have to say that these were pretty good, especially with an accompanying Hinano beer.

However, if poi was not your thing there was plenty else to choose from including this selection of salads.

And for the sweet tooth this delectable table of desserts and fruits.

Our appetites sated, we continued the Tahiti circle tour heading for what turned out to be the most spectacular site on the tour.

Gerald was very circumspect about our next stop, just implying that it would be pretty interesting. At the village of Tiarei we took one of the few side roads in Tahiti and travelled inland a few miles before stopping at a small parking lot. From here we followed a well worn path through the rain forest for several hundred metres. Alison was in front of me and suddenly stopped and pointed out in wonder at what she saw as she rounded a corner.

This is Vaimahutu waterfall, one of three that make up the Faarumai waterfalls and it is truly spectacular.

We had one more stop on the Tahiti circle tour before reaching the outskirts of Papeete and this was at the Arahoho Blowhole. Unfortunately the ocean waves were not being cooperative and the blowhole was a dud, But there was a consolation prize – this gorgeous black sand beach in a setting that was as South Pacific as it gets. Actually as a geologically young island Tahiti does not have a lot of beaches, those tend to be on the much older atolls, a couple of which we will visit later on the tour.

Our last stop on the Tahiti circle tour was, for western tourists at least, a very important historical site on Tahiti. In 1769 Captain James Cook along with the famed botanist Joseph Banks and other scientific notables, observed the transit of Venus from a point on Tahiti just outside Papeete that was thereafter named Venus Point. Today it is a park featuring perhaps Tahiti’s best beach which on the afternoon we visited was alive with families enjoying the warm waters and picnicking under the shade of the large trees. The park features a number of notable sites, the most prominent of which is this remarkable lighthouse.

It is all the more remarkable in having been designed and constructed by the most famous family of lighthouse architects in Britain, the Stevensons, of whom author Robert Louis was one. Living as I do not that far from Peggy’s Cove, Nova Scotia which has arguably the most famous lighthouse in Canada, I have always been fascinated by lighthouses and never miss an opportunity to visit and hopefully climb one. I first became acquainted with Stevenson lighthouses while in Scotland where for over 150 years various generations of the Stevenson family built some of the most famous and photogenic lighthouses in the world including this one at Turnberry that stands besides the ruins of the castle where Robert the Bruce was born.

I later found out that the family had a hand in creating one of Newfoundland’s most unique lighthouses at Rose Blanche on the south coast.

.As you can see from the photos, both those lighthouses are on some pretty desolate shores so the last thing I was expecting to find in Tahiti was a Stevenson lighthouse. As this plaque notes, it was built by the famous author’s father in 1866-67. It is the only lighthouse in Tahiti.

There is one other monument in the Point Venus park that merits attention and that relates to an even more famous (or infamous) event, the mutiny on the H.M.S. Bounty. It was at Point Venus that Captain Bligh first anchored in his mission to collect breadfruit plants to take back to the slave plantations of the Caribbean. It was also here that the much of the crew became enamoured with the beautiful and sexually inviting Tahitian women. I don’t need to tell you how that ended up.

This is me at the Bounty monument on Point Venus which was erected in 2005. Contrary to what you might think the portraits are not of Fletcher Christian and his Tahitian wife Maimiti, but rather John Adams, the sole mutineer still alive when the settlement at Pitcairn Island was visited by an American whaler in 1808. The woman is Martha Young, a descendant of the mutineer Ned Young. Why these two were chosen I am unable to determine. The back of the monument has the names of all the Bounty crew members.

This was a fitting place to end the Tahiti circle tour, being associated as it was with probably the event that most people think of first when they think of Tahiti. From here, via the usual Papeete traffic jam we made our way back to the Te Moana resort.

In the next post we’ll take a ferry to Moorea which is rumoured to be even more beautiful than Tahiti. Stick around to find out.